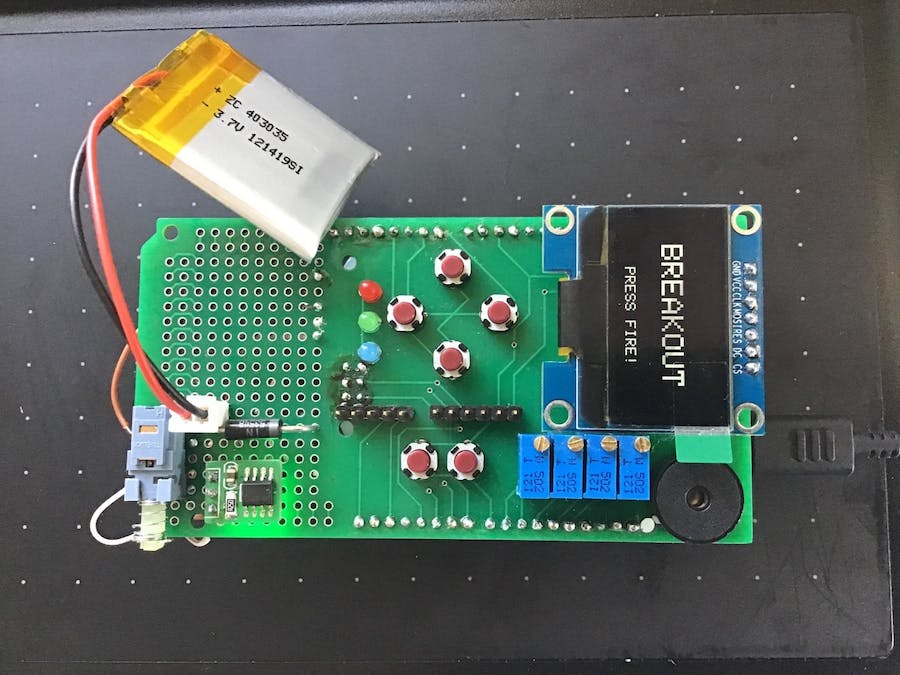 It started 2020 winter when things start to get cold. How cold? We do not have a good thermometer at home. The one on the alarm clock is 10 degrees away from what it is, and the one on the air-con controller jumps around. The mechanical one is broken and the "Galileo thermometer" only had such a limited range.

So instead of buying a thermometer, I went out and purchased a temperature sensor. And I want a good sensor, because bad sensors like the ones in my alarm clock doesn't even do a good job being a "reference". So I went out, and got myself a SHT-30.

Then I started to hook it up to the board. All of my projects revolved around the Arduino Leonardo, and, with its many pins (and functionality), along with direct USB, it's a good place to start.

About half a year earlier than that, I had put together a "Arduboy hat" for the leonardo with a "proto shield".

Being a absolute nightmare to wire even without the expansion port, I decided to sit back and draw a PCB instead.

On a whole, the board feature places for 6 buttons (input), a display (output), beeper(output), led(output), which form a decent interface. The "expansion connector" in the middle uses the "Arducart" wiring and have pins for power, SPI, I2C, serial and a analog pin to connect other things -- such as the SHT-30.

But hey, the Arduboy library interferes with the I2C library of the Arduino. And this make the single most tremendous blockade in the entire project -- where I had to come up with the code for the display (which include the font and function for displaying numbers and numbers with digits), and the code for the buttons -- since the tweeter/beeper/buzzer are unessential.

Back before the board is up, I had the Leonardo listen to Serial over USB for the commands to send to the sensor, and send the readings from the sensor back over to Serial, where the Arduino IDE then listens to. Then I do the data conversion with my Ti-84 CSE hand-held calculator to get the temperature reading.

This is before the ordered PCB had been delivered.

Eventually the PCB is fabricated and delivered, and a case is made from a piece of wiring duct.

And since the PCB is here I decided to put the display on and start working on the display code. But it didn't work out, so I decided to automate the code for the data conversion from the sensor.

But eventually, bit by bit, you have it.

Notice how I used separate RGB leds instead of a common anode RGB led(instead of the more common common cathode RGB led) because the very slight difference between the two can cause issues with "why is my RGB led not working?"

But voltage-regulated switch is difficult to find and complicated to work with. So I made the compromise by ensuring that the battery will not explode from over-charging when the voltage from the power pin rises, and add in a switch for manual toggle between the two.

The diode may be drawn in the wrong direction, but the idea is there.

Luckily I was in china and we had a place called Shenzhen. And over there, there is a cool dude that thought about making something other than those (utterly stupid and repetitive) blue boards with a connector at one end and two pins at the other.

Technically I can use something as simple as a resistor-pair voltage divider, but it isn't too good for the battery in the long term and it varies with load.

If there is demand, I guess we can have the TP4056 as the single surface-mount item we have to solder, as I had recently soldered a SOP-8 amplifier for a cheap DIY USB speaker kit, and I think it is not something overly difficult to pull off with a generic soldering iron. The other resistors and capacitors can be swapped for thru-hole ones. Much like the speaker kit. We had some board room left, anyways.

So eventually I fixed the display code and get the numbers showing up. It's time to jump back to hardware and add the charging circuit.

And I am in a BIG rush to see whether that scrawny circuit that I had drawn above actually work, so I didn't bother with things for too much.

Ok. Before we jump in to the rest, allow me to jump in and explain why this thing will even work.

The Atmel Mega32U4, or, the Arduino Leonardo (or at least, most of it), "runs on 5V". So when you plug it in via USB, the current flows from the USB to a regulator. Then, because the mcu "runs on 5V", it connects to the 5V pin. Then it goes to the mcu.

(note: on the Arduino Leonardo, the 5V pin is closer to the regulator (length over pcb tracing) than the mcu.)

But when you go look at the datasheet of the Atmel Mega32U4, it says:

The LEDS, buttons and beepers are easy, but the display goes a bit more complicated ...

Because as you can see, in the SSD1306 datasheet, the voltage for driving the panel is between 7V to 15V.

But it also have a configurable built-in charge pump. And it looks like that as long as the voltage is higher than the logic voltage (3.3V) it should be good.

And we are not driving the voltage down to below ... say, 3.5V because it will hurt the battery. Or the listed 3.7V because you find out that your battery have a protection circuit.

It works, as designed.

Ah. Here I actually had it run my first Arduboy game -- the Breakout.

By this point, all we had remaining is a little bit cleanup of the mess, and that will be the XpandShield v1.0.

Ignore that 5354B diode. That will eventually be replaced by the one we used -- the SN240.

I was very happy at this point. I even bundled stuff as "kits" and started asking my friends if they would want one for $20. Of course, no one is interested.

But what about the possibility of using other Arduino boards?

Well, first off, I don't like the idea that the battery circuit is hand-soldered via jumper wires. So the PCB is updated.

Secondly, we have to accommodate the fact that the DUE have different I2C wire locations. So a "version selector" is implemented on the board.

Then, because the Arduino Due runs on 3v3, and the LED the Arduboy uses means that the LEDs are pulled LOW by the controller to light rather than being pulled HIGH. So the LEDs need to switch from 5V to 3v3 rail. This also need a redesigned PCB.

The added wires, as well as the "need" of making space for the digital pins at the bottom and making the "expansion area" as large as possible, meant a lot of changes need to happen to the PCB.

I decided to add a pin next to 5V for 3v3 breakout. Because why not?

As much as I think Fritzing is a more powerful tool to draw PCBs with, it forces you to donate some dollars in ways that I could not. It is also a hassle to build Fritzing on my own (not including the time it will take to actually build the dependency and the entire application, which could be 15+ hours). So I went with KiCad and ... so far so good.

Around the same time, I started to look at what exactly are the footprints in the PCB editor, and found that everything I did is "wrong".

But it is the only way that ensure that there will be copper lining for all "holes", and that the opening of the holes is in the right unit. Although the latter will not make a functional difference.

And so the new PCBs arrived. I soldered it together, and thought "man, it look dang petty.". By that I mean it look *REALLY* good. Handsome, if you will.

No, this is not a 3-D computer rendering. Look closer.

Some days ago, I figured that one SHT-30 is too few. And I need a bit more. So I ordered two SHT-31 breakouts. And I made .... little "cartridges", if you will, that fit the expansion header.

So here it is, with my temperature sketch running on Arduino Due.

(accidentally sat on top of it)

The Due had a on-board step-down voltage regulator sourcing from 5V and driving 3v3. The requirement ask for typical input to be at 5V but the block diagram and minimum ratings did not say that the regulator will fail to output 3v3 when the input is above 3v3 but below 4.5V.

And Arduino Due is a 32 bit ARM M3 too. This shield sure will open up new possibilities.

As it happened, it might be EXTREMELY difficult to acquire the charging module I had obtained, so I have decided to update the design with pads for the TP-4056.

However, as it turns out that the TP-4056 is from a relatively small company based in China, what will probably happen is that the charging IC will eventually become a MAX1811 or similar (or the "original" LTC-4056), more wide-available IC on the market.

You will NOT get standardized 16340 battery holders, despite their excellence size and general availability. Connect the Li-ion/Li-Po battery of your preference at the connector.

That's it, I guess. Thanks for swinging by.