Expanding on my last project post for getting started with the TE0711, this project covers developing the application for the MicroBlaze.

Writing an Embedded Application for the TE0711 SoM

Writing an Embedded Application for the TE0711 SoM

Expanding on my last project post for getting started with the TE0711, this project covers developing the application for the MicroBlaze. 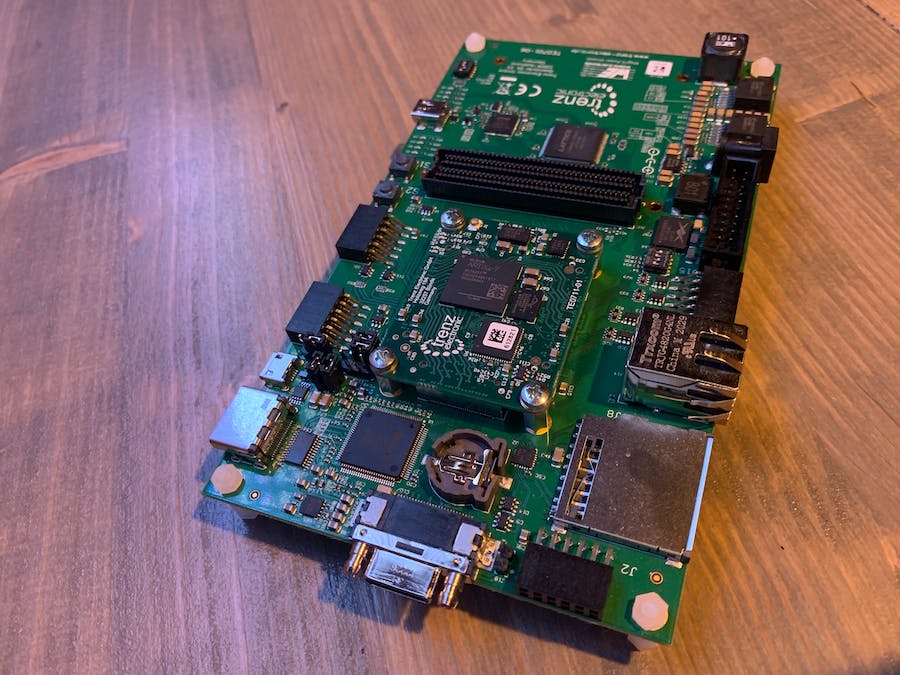 In my last project tutorial using the TE0711 SoM from Trenz Electronic, I went over setting up the hardware in Vivado and making it compatible with my selected baseboard, the TE0701. Since that post ended up being longer than I expected to properly cover the hardware setup, I decided to cover the embedded application development in Vitis for it here in a new project post.

Since the UART COM port is the main method of communication with the host PC that I enabled in the hardware design, I decided to write a simple application for the UART to listen for any input and immediately echo it back. This application will run forever until a user presses the escape key.

Point to the desired workspace location to create the Vitis project in. I personally like to create a folder with the Vivado project directory titled vitis_workspace to work from.

Once a workspace is pointed to, click launch and Vitis will generate a new empty project workspace.

1 / 2 • Point to the desired workspace location.

Select the Create Platform Project option to pull in the hardware platform that was exported from Vivado:

After Vitis generates the new application, build the Vitis project to verify everything is working correctly so far.

Enable the instruction and data caches in the MicroBlaze.

Skip the initial connection automation that appears when the instruction and data caches are initially enabled on the MicroBlaze, instead add an instance of the AXI BRAM Controller to the block design. After adding the the AXI BRAM Controller, then run Connection Automation. This connects the BRAM via an AXI SmartConnect IP versus the regular AXI Connect IP.

To tell the MicroBlaze it has more memory space to use for the instruction and data caches, relaunch its configuration editor (double-click on that MicroBlaze IP block in the diagram) and increased the Size in Bytes field to 16kB on the Cache page (page 3 in Vivado 2019.2).

Switch back to the diagram window and regenerate the layout then validate the design to verify that there are no errors or critical warnings. Save the block deign, re-create the HDL wrapper, and re-run both synthesis and implementation. Finally, generate a new bitstream and export the hardware platform again. I always point to the same location that I exported the previous version of the hardware platform so it just overwrites it.

Once the hardware platform is exported, switch back to Vitis and right-click on the platform project in the Explorer window. Select the option to Update Hardware Specification. Since I simply over-wrote the previous version, it's already pointed to it. Simply click OK so that Vitis is prompted to re-read the hardware platform so it can pull in the new hardware updates.

Sometimes that linker script doesn't update automatically to allow the system to take advantage of the newly added memory. To force it to update, right-click on the application in the Explorer window and select Generate Linker Script. Click Generate on the window that pops up, make no changes but verify that the new memory sizes appear in the hardware memory map.

1 / 2 • Right-click on the application in the Explorer window and select Generate Linker Script.

The Hello World application template generates a helloworld.c file that contains the main function. I simply added my code to it, but you could also create a new file or import an existing one titled main.c.

As I mentioned at the beginning of this post, this application will simply sit in an infinite loop listening on the UART and echoing back any characters it sees sent to it until the ESC character appears in the console:

Build the application after writing the code and saving the file to verify there are no errors.

Once the FPGA has been programmed with the bitstream run application using the System Debugger by again right-clicking on the application from the Explorer window then selecting Debug As and Launch on Hardware (Single Application Debug). This give you the option to either run the application as is or step through it for debugging.

Vitis will take a moment to launch the application on the MicroBlaze and switch over to the Debug view/workflow.

1 / 2 • Right-click on the application from the Explorer window then select Debug As.

Once switched over to the Debug view, connect to the TE0711's now available serial port from the Vitis Serial Terminal (or you can use any other serial terminal application like Putty if preferred). Vitis' Serial Terminal defaults to a 115200 baud rate, so don't forget to change to to 9600 before connecting or the output will just be random characters.

Step through the application at first if you want to see exactly what's going on, then let the app run so you can test out the echo feature. The buffers allow for more than one character at a time to be entered and echoed back.

Run the application and start entering characters into the serial terminal.

I'm sure there is a limit to this before it overflows, but after experimenting with some shortish sentences, it seems pretty robust! Overall, it's a handy little bit of code to keep around.

35 projects • 537 followers
Working as a full-time SDR/FPGA engineer, but making time for the fun projects at home.
ContactContact