This tutorial walks through an application that reads/writes data to DDR memory from the Linux userspace on the Zynq-based Arty Z7 FPGA.

This tutorial walks through an application that reads/writes data to DDR memory from the Linux userspace on the Zynq-based Arty Z7 FPGA. 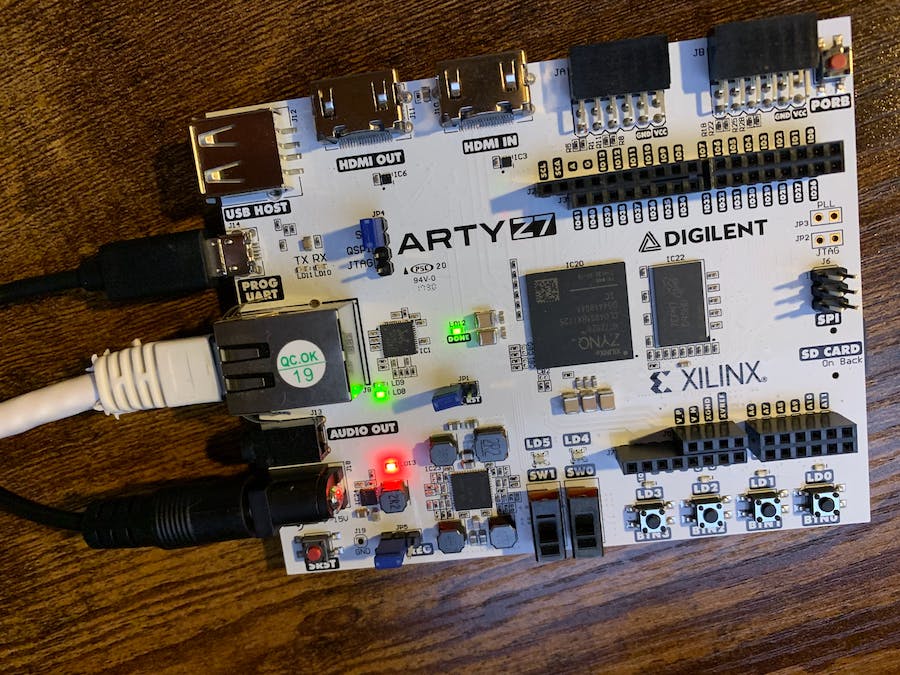 Direct memory access, or DMA as it's referred to, is an important aspect of embedded development as it a method for accessing the embedded system's main memory (typically DDR) without tying up the CPU, therefore leaving it open for performing other operations during the read/write cycle to memory. DMA simply allows for the processor to kick off a transfer to read from/write to the main system memory, then it generates an interrupt indicating the completion of the transfer. Which leaves the processor free to do other tasks until the interrupt calls its respective service routine.

While the concept of DMA is straightforward enough, trying to get the full picture in one's mind of how to implement it on an FPGA with embedded processor such as the ARM-core processor in the Xilinx Zynq SoC is no small feat. Then throwing in the extra layer of complexity of how to access it from the userspace of an operating system such as Linux, just makes it even worse.

So for this project, I'll start by going over the mechanics of getting the hardware setup in Vivado, and base settings in the PetaLinux project setup for the kernel drivers and Linux application in the root filesystem. Then I'll go over the functionality of how the code in the Linux application is actually accomplishing the task of controlling the AXI DMA in the programmable logic of the FPGA to perform a transfer.

Add DMA to the Hardware Design in Vivado

The differentiation is important because memory-to-memory transfers read/write data between different memory locations whereas a stream-to-memory transfer takes a serialized representation of data and writes it to a designated memory location and a memory-to-stream transfer reads data from a location in memory then converts it to a serialized format.

The AXI DMA IP block allows for any peripheral equipped with an AXI stream interface to access the main memory of the system via stream-to-memory or memory-to-stream transfers. Given that I've come across the need to use DMA for stream-to-memory/memory-to-stream transfers more often as an FPGA developer, I'm going to go with the AXI DMA IP for this tutorial.

I'm using the Arty Z7 FPGA development board and I'm starting with the base hardware design for it that I created in Vivado 2020.2 as outlined in one of my previous posts. All of the modifications I will be making will be in the block design of that project.

Base block design for the Arty Z7 board before adding DMA.

In the Zynq Processing System IP block under PS-PL Configuration, enable one of the AXI high performance slave interface. This is the interface that the AXI DMA will use to access the DDR (main system memory) of the Arty Z7.

Next, add an instance of the AXI Direct Memory Access IP block to the Vivado block design. Double-click on it to open the configuration window and uncheck the box next to Enable Scatter Gather Engine. This will automatically uncheck the box next to Enable Control / Status Stream as well. This project will be using the AXI DMA in Direct Register mode, as Scatter Gather is a whole different beast.

The rest of the default options can be left for the AXI DMA IP. Click OK to close the configuration window.

Click the option to Run Connection Automation that appears in the green banner across the top of the block design window. Check the box for All Automation and click OK.

I chose to connect an AXI Stream Data FIFO IP block, connecting its S_AXIS port to M_AXIS_MM2S and its M_AXIS port to S_AXIS_S2MM.

Validate the block design and save it. Then generate or regenerate an HDL wrapper for it by right-clicking on the block design in the Sources window and selecting the option to Create HDL Wrapper...

Once the Sources window shows that Vivado is finished updating the project file structure (the word Updating... disappears from the upper right corner of the window) run synthesis, implementation, and generate a new bitstream. After a new bitstream has been generated, export the hardware for use in PetaLinux by selecting File > Export > Export Hardware...

Select the option to include the bitstream in the exported hardware platform and specify the desired output file path. I personally like to use the main project folder for the respective Vivado project. The final screen in the pop-up window will summarize your selections for verification. Click Finish to export the hardware as the Xilinx filetype,.XSA

As I've mentioned in the past, this command pulls the hardware design into the PetaLinux project and launches the System configuration GUI for you to specify hardware configurations such as the target UART port to be used, the root filesystem type and where it will be stored, the target ARM core processor within the Zynq chip, and so on.

Since I'm not making any other changes to the hardware in the PetaLinux project outside of importing the new hardware design that now has the AXI DMA in it, I simply exited the System configuration GUI and selected the option to save any changes.

By default, the Xilinx AXI DMA kernel drivers are enabled in PetaLinux projects, located under Device Drivers > DMA Engine support > Xilinx DMA Engines. The drivers for memory mapping I'll be using in the Linux application to view the memory space (/dev/mem from the userspace and CONFIG_DEVMEM in the kernel) are also enabled by default in PetaLinux projects. So you don't need to mess with configuring the kernel for this project, but if you are curious, you can look through the kernel DMA options and select the Help option for each to get an informative little description of each:

There is a test client for the DMA that can be selected to be built into the kernel as a module which allows for a kernel level test of the DMA engine using the modprobe command to load it manually when desired.

Navigate to Device Drivers > DMA Engine support where DMA Test client is towards the bottom of the list. Enable it by highlighting it using the arrow keys then pressing Y.

I won't cover how to run the DMA test client in this post, but there is a great how-to for it here.

This project will be demonstrating how to use AXI DMA from the OS/application layer in Linux using memory mapping. Thus a custom application needs to be added to the PetaLinux project with the following command:

The --enable flag at the end simply saves you the step of having to manually add the application to be included in the next PetaLinux build using the root filesystem configuration ASCII GUI.

How to Use DMA from Linux Userspace

Now that I've gone through the hardware setup and touched on the Linux drivers that I'm using to control the DMA, let's take a look at the overall picture if what's happening here.

As I previously mentioned in the hardware setup of the AXI DMA in Vivado, it is configured for direct register mode, meaning that simple transfers of data of a given length will be transferred from a source address to a destination address in main system memory via the MM2S and S2MM DMA channels.

Taking a look at Table 2-6 in Xilinx's PG201 for the AXI DMA IP, it lists the relevant control and status registers to read and write to for Direct Register mode:

The source address registers, destination address registers, and transfer length registers for the MM2S and S2MM channels are straightforward as they simply have a given value written to or read from them. The specific control and status registers however have bits dedicated to certain actions/stats requiring a bit more explanation:

For the control register of the DMA MM2S channel, the main bits to look at for basic function of the AXI DMA in Direct Register mode are the following:

Then the following bits are monitored in the status register of the DMA MM2S channel:

For the control register of the the DMA S2MM channel, the main bits to look at for basic function of the AXI DMA in Direct Register mode are the following:

Then the following bits are monitored in the status register of the DMA S2MM channel:

Now seeing which registers are relevant in the DMA controller interface, here's the sequence to accomplish a transfer using the AXI DMA (I have also commented the code in the dmatest.c file attached below to correlate these steps to):

8. Write the length of the transfer from the MM2S channel by writing the value for the total number of bytes to send out to the MM2S transfer length register.

10. Monitor the IOC flag (bit 12) and idle flag (bit 1) in the status registers for the MM2S and S2MM channels. Once both of these bits read out as being set to 1, the transfer is complete.

I made this high level block diagram in draw.io of what is happening.

The AXI DMA engine is then accessing the DDR directly with its controller interface, M2SS DMA channel interface, and S2MM DMA channel interface. The AXI DMA engine pulls data out of the DDR from the specified source address and converts the memory mapped data into a serialized format before outputting it on the AXI Stream MM2S port to the input of the AXI Stream Data FIFO. The AXI DMA then receives the data back from the output of the AXI Stream Data FIFO in on its AXI Stream S2MM port where it converts the serialized format of the data back to memory mapped and writes it to the specified destination address in the Arty's DDR.

After adding the code to run the AXI DMA to the custom application, first build or rebuild the root filesystem.

Then build or rebuild the whole PetaLinux project.

If you haven't done so already, prepare an SD card for loading Linux onto it by partitioning it into two main partitions. A FAT32 partition that is at least 500MB with 4MB of free space preceding it where all of the files related to the boot process will live such as the boot binary image and the kernel. And a second EXT4 partition at least 4GB in size where the root filesystem will live.

Install the SD card in the proper slot on the Arty Z7 and boot into the Linux image.

To run the DMA test application:

Looking at the code in dmatest.c, you'll notice that the DMA is being tested in that a recognizable pattern of data is being written to the source address in DDR and is then checking to see if that is what ends up in the destination address. Each step from the DMA transfer process specified above is also outlined with print statements.

As we can see, the hex pattern of test data is successfully read out from the destination address in the Arty's DDR.

While this post is quite long-winded, I hope the thoroughness can really help with a mountain it can be to first figure out how to implement DMA in FPGAs. I know I was pretty stuck when I first started out. 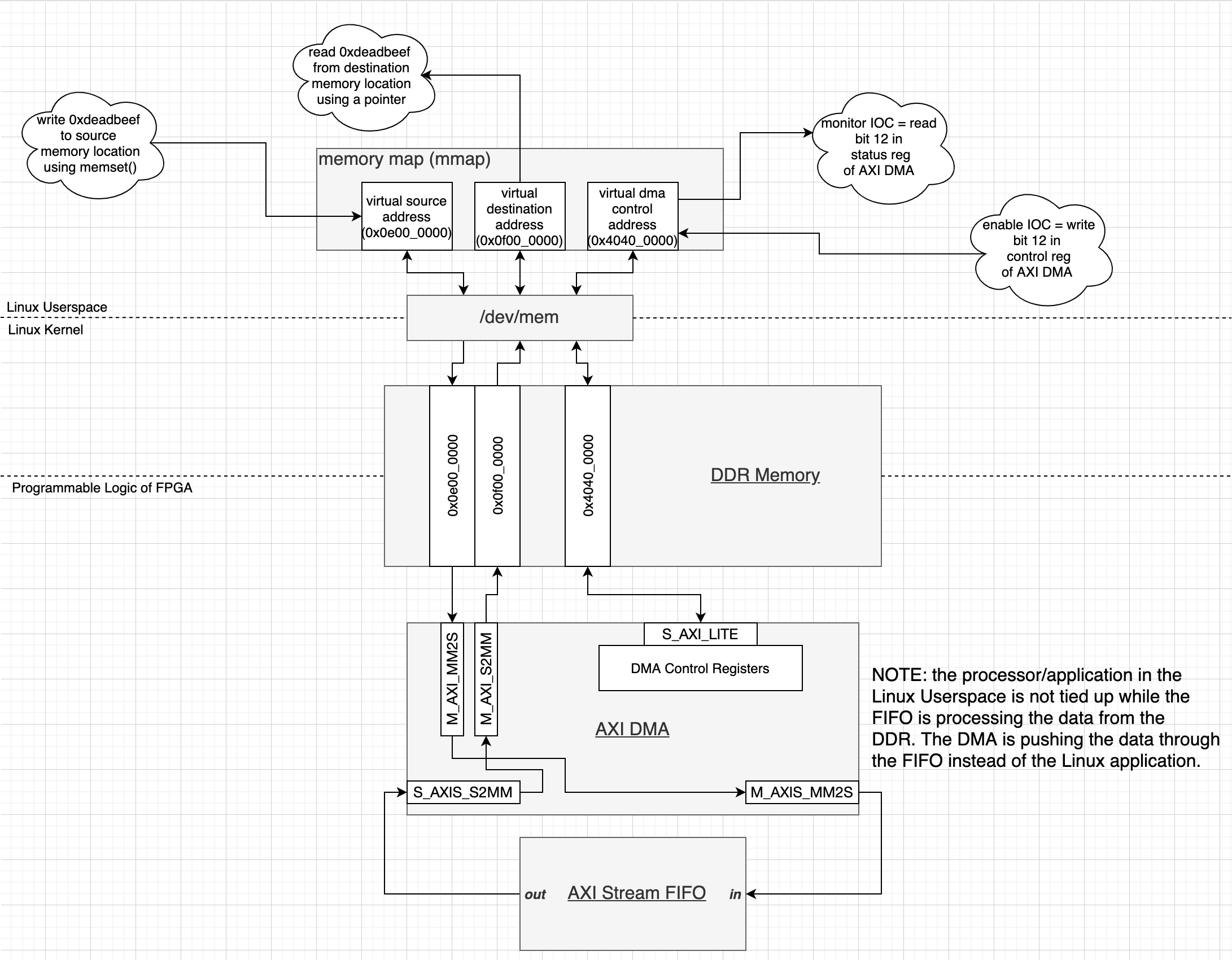 102 projects • 1116 followers
Working as a full-time SDR/FPGA engineer, but making time for the fun projects at home.
ContactContact