As a fun start to 2022, I pulled out the HP vintage bubble displays I bought on eBay with a simple Verilog controller module on the Arty Z7.

Hello 2022 with Vintage Bubble Displays on the Arty Z7

Hello 2022 with Vintage Bubble Displays on the Arty Z7

As a fun start to 2022, I pulled out the HP vintage bubble displays I bought on eBay with a simple Verilog controller module on the Arty Z7. 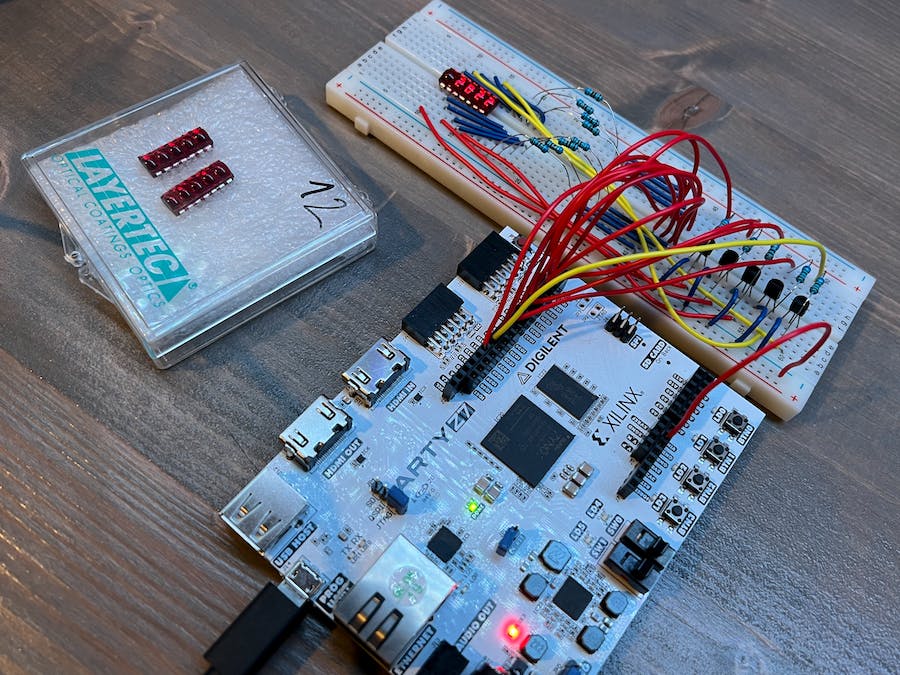 Scrolling through my Twitter feed one day last year, I saw this really cool looking little 7-segment ICs which turned out to be the now-vintage QDSP-6061 5-digit bubble display from HP. So naturally, I immediately jumped on eBay to buy myself a few to play around with. They're so cool, just look at them:

I could only find the datasheet for the 4-digit version of this chip (QDSP-6064 - which I went ahead an attached below) so I had to do some probing to figure out the full pin-out for the 5-digit QDSP-6061:

And if you're not familiar, the small white dot on the bottom side of the IC denotes pin 1:

Since the cathode needs to be connected to ground, I chose to use a simple NPN BJT transistor to act as a switch to connect the cathode pins to ground when a logic level high signal is applied to its base from the FPGA (with a 6.8k-ohm resistor on each BJT base).

I chose to use my Arty Z7-20 FPGA development board for this because of its handy Arduino header I/O, which are 3.3v logic. Thus in order to knock it down to the forward voltage range of the LEDs in the QDSP-6061 (1.6v - 2.0v) and limit the current appropriately, I put 680-ohm resistors on the input on each anode pin.

With a bit of jumper wire spaghetti magic, I got the simple circuit built up.

1 / 2 • Fritzing crashed on me so I threw this together in iCircuit on the Mac OS side of my computer.

I decided on 2N3904 transistors since they're super common and I have quite a few on hand. I figured that there had to be some level of delay from when the logic level is set high on the base of the 2N3904 to when the collector is connected to the emitter and provides a path to turn on the LED (essentially the slew of the transistor). And since I'm working with an FPGA, I though this delay could potentially be impactful from a timing perspective so I modeled it using LTSpice.

Since I'm running the logic of my FPGA design at 100MHz, the transition time of the logic will be 10ns, and I added 20ns to account for propagation delay through jumper wires and the breadboard. This calculation showed that the slew of the 2N3904 would add about 100ns or 0.1us of delay between the I/O pin of the FPGA going high and the LED of the segment illuminating.

Next I created a new project targeting Arty Z7 in Vivado 2021.2:

As with pretty all of the new Vivado projects I create for Zynq-based FPGAs, the first step is to create a new block design, and add the Zynq processing system IP block. Then apply the block automation that appears afterwards to apply the Arty Z7 board presets to the Zynq PS IP block. I also added a few other GPIOs from the Board tab for the buttons and switches, but this is optional and not necessary to this project.

Since it's the new year, I thought it'd be fun to have the QDSP-6061 scrolling text across it saying "hello 2022". After some research and trial+error, I found that each 7 segment display needs to hold its output for 1 millisecond for it to appear stable to the human eye, therefore the bubble display needs to be set to a 1kHz refresh rate.

Furthermore, since the 7 segment displays in the QDSP-6061 are common cathode and each digit has their respective anodes for a given segment tied together (i.e. - the anode for each 'a' segment of all five displays are tied together) this means that the Verilog code can only drive one digit at a time by setting the appropriate character on the 8 anode segments, then connecting the corresponding digit's cathode to ground. Since I have the programmable logic of the Arty running at 100MHz (10ns per clock cycle) and the refresh rate of each digit can't be much faster than 1kHz (1 ms), being constrained to driving one digit at a time shouldn't be an issue since the transition time between switching which digit is currently being driven is only going to be 10ns - 40ns. This boils down to needing a loop that drives each of the 5 digits for 1ms at a time in a round-robin type fashion.

For the scrolling text part, this required another loop to update the character register for each digit after the round-robin loop has finished a set number of cycles. This set number of cycles dictates how fast the phrase "hello 2022" scrolls from right to left across the QDSP-6061. I found that 255 cycles was a nice not too fast or slow speed. This loop incremented a counter every 255 cycles that updated the character register for each of the 5 digits for the previous loop to them multiplex between for each of the 1ms cycles. See my Verilog code attached below.

Once I had the Verilog written, I added the module for bubble display to block diagram by right-clicking in a blank space area and selecting the option to Add Module... Vivado will automatically detect any valid Verilog modules (or VHDL if you have the project settings set to VHDL) present in any design source files to allow you to add it to the block design.

The connection automation feature of the block design will detect the clock port on the module and offer you the option to auto-connect it to the logic clock output from the Zynq PS IP block. This will also auto-connect the reset port to the appropriate reset line.

and created an HDL wrapper for it, selecting the option to allow Vivado to auto-manage it for me:

Next, I added constraints for the pin-out of the Arduino header on Arty Z7. You can find the master constraints files for all Digilent boards such as the Arty Z7 in their repository here.

I copy+pasted over the constraints for the package pins IO0 - IO12 on header J4 and replaced the port names with my cathode and anode register names:

Finally, I ran synthesis, implementation (place & route), and generates a bitstream. Once that was completed, I exported the hardware platform including the bitstream:

In order to boot up the Zynq ARM-core and program the bitstream onto the FPGA, I created a Vitis project, starting with a new platform project based on the exported hardware platform from Vivado:

Since I'm mainly focusing on the execution of the bitstream, I didn't bother with editing any of the code in the main function of the Hello World template and ran a build of the project after it generated.

As a quick way to get the bitstream on the FPGA and running quickly, I simply ran a single application debug run on hardware:

Once the bitstream was uploaded and programmed onto the FPGA, I saw the logic kick in immediately to start the text scrolling across the QDSP-6061:

I'm definitely going to layout a fun little PCB to transfer this circuit to. I think something in the form of an Arduino shield to fit directly onto the Arty would be a fun thing to have.

62 projects • 787 followers
Working as a full-time SDR/FPGA engineer, but making time for the fun projects at home.
ContactContact