Use this project to get started on your first Pynq design using the Pmod Hygro to monitor the temperature and humidity of your environment!

Use this project to get started on your first Pynq design using the Pmod Hygro to monitor the temperature and humidity of your environment! 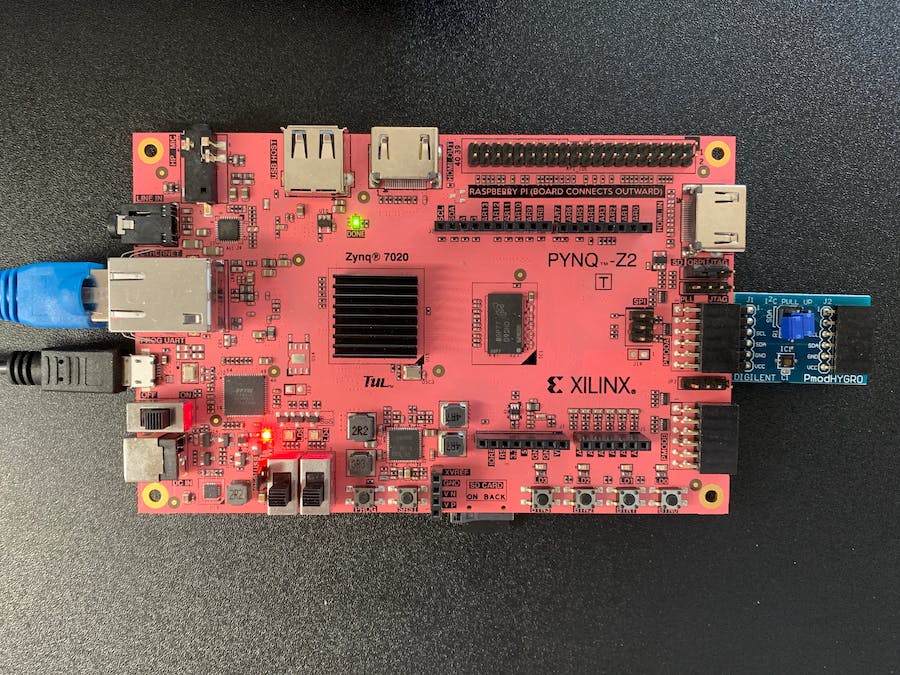 If you already have your Jupyter Notebook opened, follow these steps: On the right side of the screen, click on "New", and open a new terminal. Pip install the repo containing the code from my github using this command.

Motivation for this Project

One of the most important aspects of playing an instrument, besides actually making music, is taking proper care of your instrument. After playing the viola for almost 12 years, I've realized that my instrument played best when I made sure to control as many environmental variables as I could. Two of those variables, humidity and temperature, affect almost every aspect of an instrument's performance (tone, color, etc), and will be the driving force behind this project.

First, I need a way to monitor the humidity and temperature, not only in my apartment, but also within the instrument case to make sure that they are staying within acceptable ranges. I use the Pynq-Z2 because of its Pmod ports, and because of its, relatively, small size. Second, I need a sensor that will grab this specific type of information, and for that, I found the Pmod Hygro. This small sensor contains a TI HDC1080, which will measure the relative temperature and humidity of its environment. Lastly, I need a way to display this information in real time to watch trends as the day goes by. I hope that this project can serve as a thorough introduction on how to get Pynq started, and will help future developers create their own projects!

Go to the Pynq website, pynq.io, and grab the pynq v2.5 for the Pynq-Z2 board under the "Boards" tab.

Using Balena Etcher, write the pynqv2.5 image onto the SD card in your SD port.

Wait for the process to finish and validate, then, safely eject the SD card from your laptop, and insert the micro SD card onto the Pynq-Z2 board as shown.

Connect the microUSB and ethernet cables from your board to your laptop.

Make sure everything is connected properly, and turn on the board. After a couple of seconds, open any web browser (I use Google Chrome), and type in "pynq:9090". This will open up the Jupyter Notebook.

How the Code Works

To fully utilize Jupyter Notebook, I have documented every aspect of the project using Jupyter Notebook's Markup feature. I will explain some things in this section that would be better explained here than on the notebook itself.

To write and run your own code follow these steps:

2) Click "Run", and this will auto-increment which cell is selected to the next cell

4) Continue doing this until you have compiled everything

How to Setup Hardware

Insert the Pmod Hygro into the lower row of Pmod A as seen in these pictures!

The Pmod can, technically, be placed on any Pmod Port and on any row, but for this project and for how the code is written, I placed mine this way.

Good luck on using the Pynq-Z2, and I hope to see all your great projects! Leave a comment on what you think about this project, and if there are things I should change/work on for my next project!

0 projects • 0 followers
I have been developing for three years now focusing on embedded systems and FPGA SoCs! Ask me about Pynq if you're curious what that is!
ContactContact
Thanks to Shawn Hymel and Naveen Purushotham.