Automatic and controled plant irrigation system with data monitoring through internet, locally or via SMS + alerts.

Automatic and controled plant irrigation system with data monitoring through internet, locally or via SMS + alerts. 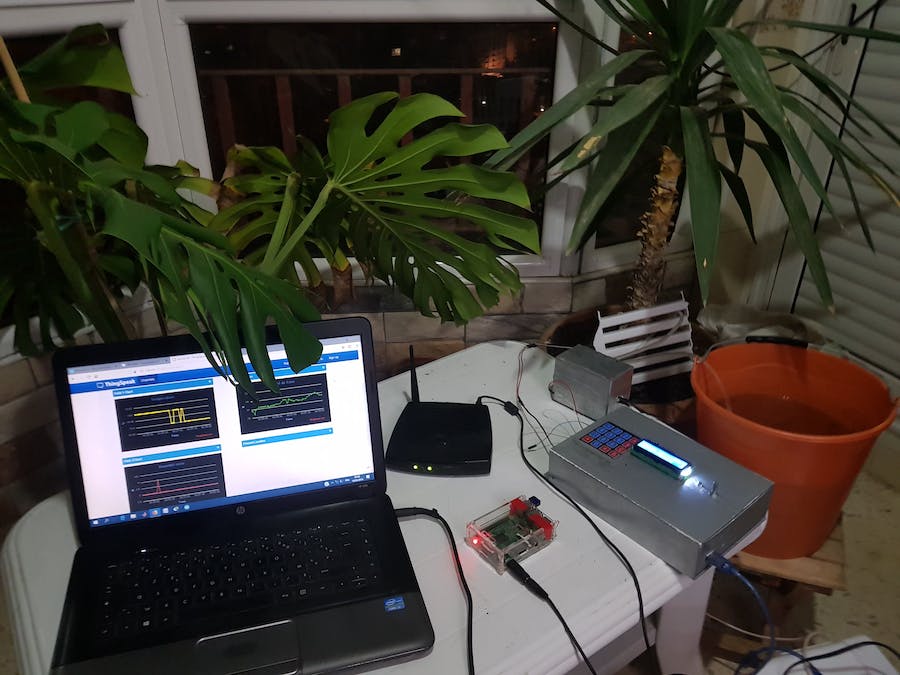 We live in an era where the human being wants to control everything, and he wants to do that the easiest way possible, so this project lets you do that with your plants, most of the time i'm too busy and forget to water my plants. To solve this problem, I am building a portable irrigation system that waters my plants depending on the soil moisture, and sends the plant's temperature and humidity and soil's humidity to an internet plateform and i've chosen thingspeak, and also it sends those data by sms to my phone and alerts me when the humidity of the air is too high

why did I chose thingspeak

thingspeak has so many features

Some of ThingSpeak Features

Personally I especially like ThingSpeak because it's so easy to send data to it and it helps so much with analytics as it works with MATLAB ; Last couple months I had many problems with ESP8266 "ESP01" which is the wifi module i used; as it works with AT commands ( basic comands to send data) thus it's somehow difficult to send data with these commands , you can still flash your ESP-01 but I found that too complicated as i've been uploading firmwares or testing tools and IDEs. I have spend many times hours on small problems . And here I found ThingSpeak which I wanted to test. And you know what? In just 10minutes (really) I have created a new account ,I have added a new channel (device) and I have learned basic API examples

Next thing, i made a calculation on the temperature data ,I have tried to create a basic Matlab programe, which was calculating average temperature. or the correlation between temperture and humidity, you can find all of these codes examples in there website

thingspeak uses applications, one of its application is called talkback it uses the same API protocol as to send or get data from thingspeak but this time to control your IOT, i've used that to control the plants irrigation, so that my system wouldn't only be automatic, now I have full control etither I want it to work in the manual mode where I can command the pump from internet or I want it automatic where it will irrigat according to the soil humidity

But now what if we dont have internet, does the system stop sending data ?

there are many solutions and I have made some of them, thingspeak is an open plateform so I thought if I cant go to thingspeak I will make thingspeak come to me, I installed it in a raspberry pi 3, no probleme if you don't have a raspberry you can just install it in your pc, the only condition is that you have to install the rasbian distribution of linux ; another solution for saving your data in case the thingspeak server stops, i've put an SD card reader for the arduino so that the data is stocked localy in it

I was using the Win32DiskImager utility under W7Pro for that, worked like a charm.

pi@RPIMON1~$mysql> GRANT ALL PRIVILEGES ON *.* TO ‘thing’@’localhost’ WITH GRANT OPTION;

IF all OK continue with loading Thingspeak DB configuration

Running Thingspeak on RPI Board

now all you have to do is set up the you arduino as it would send the data to the plateform and I chose the http protocol as my ESP01 works with AT commands :

for the wifi the raspberry and the arduino must be conected to the same router same network , change the apikey with your api key either you're sending data to the thingspeak website or localy ,or both ; and the hostname and password by your acces point's hostname and password

change the number in the SIM fonction

or change the code according to your setting

- for the keypad pins

for other componants I recomand doing as the schematic because i've made many digital pins work as VCC or GND because there isn't much power pins for all the componants and as I wanted to put the system in a box that was one solution ; but as I always say there's always another solution so if you dont want to do that you can follow what pin i've set as VCC and which one GND and you just have to change them as you want

for the talkback, tyou have to change these following you API and comand id in thingspeak

if you follow that and the schematic everything should work great

now once you change the code, and upload it in your arduino and set up your raspberry and everything works ;

and an XRDP app in your phone

conect to the raspberry with XRDP ;

and do as follow on your phone after pluging your raspberry without screen :

start the system , it should tell you enter the password, the password is "1234" (if didn't changed in the code)

and then it displays " press 0 for help " as follow

there is a menu for the keypad

"1" for diplaying temperature and time

"2" for diplaying humidity and time

"3" for diplaying the soil humidity and time

"D" for diplaying the date

A for the automatique mode

""B" for the manual mode, (this works with internet, if there's no internet do not enable it)

"#" to send data to the the local thingspeak

"5" + "#" send data to the local thingspeak and internet thingspeak

here are some pictures

1 project • 4 followers
I'am a Network and telecom student
ContactContact
Thanks to SEHAD_NASSIM_USTHB.