Winter is coming, which makes this the perfect time for a spectacular indoor craft project!

Do You Want to Make a (Dancing) Snowman?

Do You Want to Make a (Dancing) Snowman?

Winter is coming, which makes this the perfect time for a spectacular indoor craft project! 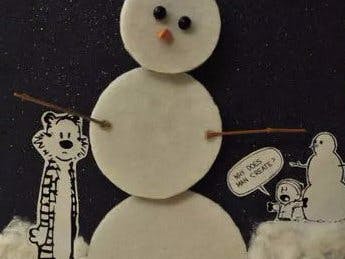 Introduction: Do You Want to Make a (Dancing) Snowman?

Winter is coming, which makes this the perfect time for a spectacular indoor craft project! Using Frozen and Calvin and Hobbes as inspiration, we decided to combine two servos and some cotton balls to create a winter masterpiece that anyone can make. There are so many dancing possibilities that you can achieve by following our simple tutorial, or you can try one of our alternate versions listed in Step #8. So follow us as we take you through each step of creating your own dancing snowman or other imaginative creature.

For this tutorial, much of what you wish to use is left up to your own creativity. If you wish to design a snowman box, some of the tech items we used were:

Other items you may also want to include are:

Step 2: Add Some Glitter Snow Below

The first step in designing our box is adding a textured background. This can be done in a variety of ways using paint, crayons, or other design materials, or by adding tiny 3D elements like glitter or beads. For our box we decided to use glitter, due to personal preference, and chose to use a blended color glitter to imitate a clear night sky.

To apply the glitter we first sprayed our piece of dark blue cardstock with spray adhesive and then shook the glitter container over our paper as we held it over a garbage can. Using a box underneath your glitter endeavors will help you reuse the glitter if desired at a later date.

Next we found three round objects of different sizes to trace on our piece of scrap cardboard. The largest circle cutout was used for the bottom piece of our snowman, and the top two were used for the dancing middle piece and head. After tracing our circles onto the cardboard we cut around the circles VERY CAREFULLY with an X-Acto knife. If you are helping kids recreate this craft you may want adult supervision for this step.

You may want to use spray adhesive again, or a glue stick, to apply the felt to your cardboard cutouts. When using spray adhesive make sure you spray carefully and evenly so the felt does not turn yellow. On our first try we sprayed a little too much glue and found that it quickly soaked through the felt, leaving it yellow even after it dried.

After gluing the top of your cardboard cutouts, place them face down on your sheet of felt and cut around the circles. Now you have three snowman body pieces ready to use for the next steps!

Before attaching the snowman and box decorations, you will want to eyeball where you want to place your servos. For this project we used two, however, you may want to use more or less depending on the design you decide to create. Once we cut out our felt snowman pieces, we laid these on top of our box and decided where we wanted them to go. Since we desired a slight overlap between each snowman part (to keep him from looking as if his body was falling apart as he danced), we placed the servos somewhat close together.

After deciding where each servo would go, we drew two dots to mark where we needed to cut. We then cut out two square sized holes that would fit the top of the servo while hiding most of the body. Once the servo fit nicely, where only the top is above the box surface, we attached the arm with the largest surface area. The larger the arm's surface area, the more easily you will be able to attach the snowman parts later.

Next, use the X-Acto knife to punch two holes beside the hole you just cut, and wrap a zip tie around each servo to hold it in place. This will create a stable setting for your servo to sit while rotating and moving your dancing snowman parts.

Step 5: Now Glue It All Together

After inserting your servos you can either begin to put all the parts together OR skip this step and save it until you have tested the servos with our code. Either way works, however, if you are generally a more cautious maker you may want to try out the servos before attaching all of your snowman parts.

We started putting everything together by gluing the largest snowman body part at the bottom of our box. Then we layered the top two snowman parts and figured out where we wanted to apply the glue. We gave our snowman some expression by gluing on some beads as eyes and a carrot nose made out of cardstock paper. For the arms we found some twigs outside and cut these down to the appropriate size before gluing them on his torso (or middle body part).

Using the hot glue gun, we applied adhesive to the middle servo arm, then tried the same with our top servo and snowman head. When placing the two upper snowman parts on our servos, we realized that the head would need some additional elevation from the servo below to avoid rubbing against the middle body part as they rotated. To fix this problem we found an old, clear lego and glued this to the top servo below our snowman's head. The lego provided enough room to move without issues and was fairly hidden due to its transparency.

Next we found some images of Calvin and Hobbes online and printed the ones we felt enhanced our overall project theme. You are welcome to find whatever characters you wish online and include them as further decoration to elevate your snowman setting.

For the snow we decided that cotton balls would do the trick, and began shredding these with our fingers to create some faux powder. We used the spray adhesive very carefully to put all these parts together, learning from earlier felting mistakes that too much spray adhesive would result in yellow pictures. Spraying the adhesive under the cotton snow helped keep everything together and made a wonderful table top decoration to celebrate winter's arrival.

For this tutorial we revised some code from our previous Monster Book of Monsters project. Our snowman project required the use of two servos so we wrote in another servo to the previous monster code. Like our previous project, we hooked up the uC32 and uploaded the revised snowman code (included below) via MPIDE. For further instruction regarding uploading MPIDE code to your uC32, please follow this link and refer to Step 3.

Step 7: Hook the Wires Up Inside

Now that the code is uploaded onto your microcontroller, you can begin attaching jumper wires to your boards. Let's start by attaching the two red and two black wires to your uC32 along the power header. The two red wires will be plugged into the VIN and 5VO pins. The two black wires will then be attached in the GND pins between the red wires. Next, plug in the white jumper wire into pin 11 in the PMW/DIGITAL header across from your other wires (see Image 1).

With your uC32 all hooked up we can move on to connecting the servos. While our servos had different colored wires than our last tutorial, they connect in the same fashion. Image 2 shows how the black, red, and white jumper wires were connected across from the brown, red, and yellow servo wires. Once you have connected your jumper wires according to Image 2, you can plug the uC32 jumper wires into the breadboard.

We will only need to plug in three of our wires from our uC32 into the breadboard, leaving one set of black and red for the power supply. The first red wire that is plugged into the VIN pin on your uC32 can be inserted into any pin along the red line of our breadboard. The black wire next to our red VIN wire can then be inserted into any pin row defined by the ABCDE values. Your white wire will then model your black wire, where you can insert the wire into another row (different than your black wire row). Image 3 more clearly demonstrates this idea.

The servo wires will then need to be plugged into the same row/column that you chose for the uC32 red, white, and black wires. If you used the same color jumper wires that we showed in Image 2, then this step will consist of matching wire colors. Your black and white jumper wires connected to each servo should be inserted into the same row as the uC32 wires, under a different letter heading. For example, the uC32 black jumper wire is in row 20A in our image, and the two black servo wires are plugged into 20C and 20E. As long as the row number matches, you will be okay choosing any of the letters as your plug in location.

Finally, you will plug in your two remaining uC32 wires (one red and one black) into their corresponding battery pack locations. If attached correctly you will insert the red jumper wire, in your 5VO pin location, into the red side of your battery pack wire. Lastly you can attach the black jumper wire, in your GND pin, into the black side of your battery pack wire (see Image 5). Once your wires are connected, you can now attach all interior components with velcro or another adhesive agent to keep everything in place.

Step 8: Now You Can Make Your Snowman, or Try Our Alternate Display Plan

While this version of our project box was created in celebration of the holidays, you can always modify your box to your liking. Some possible ideas for modified boxes include:

The code we supplied for this project will work if your design utilizes two servos, however, you can find an alternative code for one servo in our Monstrous, Moving, Monster Book of Monsters tutorial. Modifications that use more than two servos will require adaptations to the provided code, but with a little research this can be accomplished!

We hope you enjoyed our dancing snowman tutorial. Whether looking for inspiration or a creative holiday project, we can't wait to see what you come up with this season. We would love to see your creations or adaptations, but until then we wish you a happy holiday!