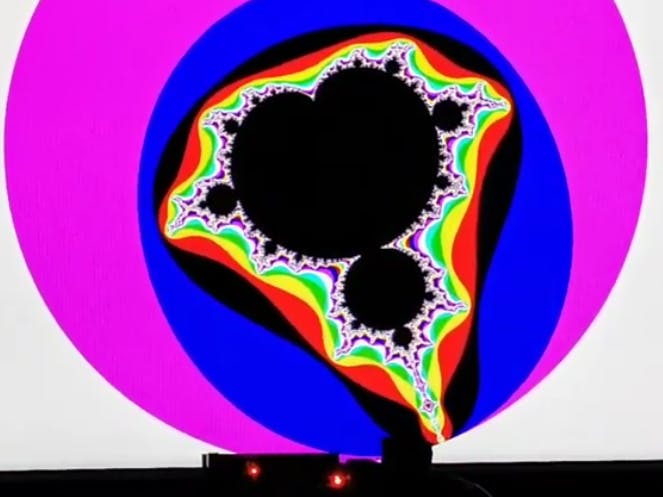 Note: blurring and artifacts are phone camera artifacts not present in the generated electrical VGA signal)

Fractal generation is a popular FPGA design exercise. For example, Stanford university used it as lab assignment already in 2002. It must have been around that time that I saw a similar demo on some trade fair, and had the itch to try my hands on it ever since.

Well, I got around to it eventually.

It took a long time.

An FPGA free-time project adds one unique design challenge: It needs to be fun all along the way.

Sometimes, the way to the finish line gets straight, obvious and boring. Like hiking versus commuting, it's not just about getting from A to B in the most efficient manner... So you throw in a new idea to make it interesting again. Rinse and repeat.

The calculation engine relies heavily on the valid/ready handshaking paradigm, which is used consistently throughout the chain.

Here, it is quite essential, for a simple reason: The 200 MHz clock rate of the fractal generator is less than two times the VGA pixel rate. Any "sub-optimal" handshaking scheme that required an idle clock cycle to recover would break the architecture.

In a typical processing block, data moves in lock-step through a sequence of registers. When cascading any number of such blocks via ready-/valid interfaces, the "ready" signals form a combinational path from the end to the beginning of the chain. This can make timing closure difficult or impossible. The problem is clear to see when considering what happens when the end of the processing chain signals "not ready" (to accept data): The data over the whole length of the pipeline has nowhere to go, therefore the whole chain must be stopped within a single clock cycle.

The solution is to divide the chain into multiple segments using FIFOs (2 slots is enough). There's a catch: I could design an "optimized" FIFO that will accept data even if full, as long as an element is taken from the output in the same clock cycle. This "optimization" would introduce exactly the combinational path the FIFO is supposed to break, thus it would be useless for decoupling the combinational chain. In other words, the input of the FIFO may not use the output-side "ready" signal combinationally.

Maybe this is obvious, but the data flow in a ready-/valid chain can be stalled at any point simply by inserting a block that forces both valid and ready signal to zero (not asserted). This block may be combinational and may depend on an observed data value. This pattern is used to stop the calculation engine from running too far ahead of the monitor's electron beam.

There are three clock domains:

Note: Names in the picture correspond to the Verilog implementation

Block "vga" 100 creates the VGA monitor timing. One of its outputs is the number of the pixel currently under the electron beam.

The pixel position passes via Gray coding through a clock domain crossing 110 into the "trigger" block 120. Here, the start of a new frame is detected when the pixel position returns to zero. This happens immediately after the last visible pixel has been sent to the display so the front porch / VSYNC / back porch time intervals can be used to pre-compute image data, up to the capacity of the buffer RAM 220.

Detection of a new frame start triggers the following "pixScanner" 130. This block has already received fractal coordinates from CPU 140 and scans them row by row, using two pairs of increments: a first delta X/Y pair for the electron beam moving right (colums) and a second pair for moving down (rows). Using appropriate deltas, the picture can be rotated by any angle.

The block keeps a frame counter, which is polled by CPU 140 to start computing the next frame coordinates as soon as the previous ones have been stored.

Generated pixel coordinates move forward into FIFO 150. This is solely to decouple the combinational accept/ready paths. It does not improve throughput since the pixel scanner is already capable of generating one output per clock cycle.

"Pixel coordinates" are formed by the X and Y location in fractal space and the linear pixel position, equivalent to its counterpart from vga block 100. The latter is necessary because results will need to be re-ordered.

Queue 160 will only accept new input from FIFO_K 150 when no data is looping around. Use of the ready/valid protocol makes the implementation of this feature relatively straightforward.

With default settings (easily changed), the implementation uses 30 "julia" engines 180. Each of them is formed by 12 pipeline levels. In other words, each engine juggles up to 12 independent calculations at a time. Each "julia" engine performs three parallel multiplications (xx, yy, xy), using 90 multipliers in total, with one operation per cycle each under full load.

Exiting data items from collection queue 190 move into FIFO_E 210 and then into dual port memory 220. This FIFO is not strictly necessary anymore: Since dual port ram 220 will always be ready to accept data, it could be replaced with a cheaper register.

Dual port memory 220 is indexed on its second port by the electron beam position from "vga" block 100. The dp-memory implements the crossing for data into the VGA pixel clock domain. Output from the RAM, together with HSYNC and VSYNC signals, is finally forwarded to the monitor output.

While not shown in the picture, buttons and LEDs are accessible via a register attached to the CPU's IO port.

Documentation to be continued... please refer to the code for now ("julia" module).

Please note: 3.3 V is out-of-spec for VGA analog signals.
I've never run into issues with direct wiring on quite a few monitors / beamers but please do use common sense.

If in doubt, please use a standard VGA connector chart for reference ("at the monitor cable", not "at the video card").

To rebuild the bitstream, run from the top level directory

...for a "bootloader" version (if you want to edit the microcontroller code)

...for the "release" version (with microcontroller code in the FPGA bitstream)

Please note that the J1B CPU remains under its original BSD 3-clause license, while my own files are released under MIT license.