This tutorial is for controlling an individually addressable LED strip with Arduino and InfraRed.

This tutorial is for controlling an individually addressable LED strip with Arduino and InfraRed. 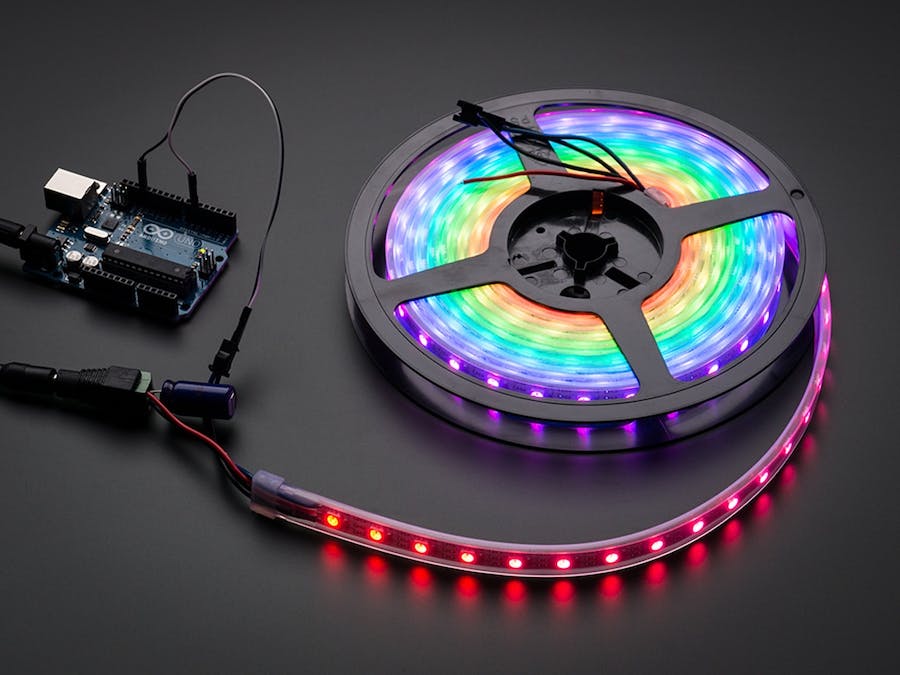 I love building things with Arduino, esp8266, and raspberry pi all the time and on Amazon Prime Day, I came across a deal on individually addressable LED strips (RGB LED strips) and decided to make something with them. So, I hooked them up in my room and made an Arduino controller with IR for them.

An individually addressable LED strip is a normal LED strip with a couple major differences. Each LED is a RGB LED instead of a plain white LED and each one can have it's color and brightness controlled separately. RGB stands for Red, Green, and Blue. So each LED actually has three separate ones inside. 1 red, 1 green, and 1 blue. You can learn all about individually addressable LED strips here.

After googling ideas, I found a guy who did a similar project here. I originally thought that I would need one Arduino, but this project uses two. I soon found out that individually addressable LED strips require precise timing. Do you know what else does? Yep, IR also needs precise timing because if the Arduino isn't available and listening at the exact moment the IR code is received, the code will disappear. So I'm using one Arduino for controlling the LEDs and another for the IR receiver, with serial as the link. Serial has a buffer so once the sending Arduino sends, the data sits there and waits till the receiving Arduino acknowledges it.

I absolutely love making things with WiFi. I even wrote three other tutorials on here using wifi devices. But, this is going above my bed in my room. WiFi has actually been proven to be dangerous. Especially so close to ones head 24/7. It would be awesome to control this using the Zebra widget in Blynk with exact color choosing, but I decided to go with the much less hazardous IR option, because this is to be near my head all night every night. You could make it so that the WiFi disconnects at night. Of course, you wouldn't be able to control the LEDs at night then. I might make another individually addressable LED strip project with that in mind.

Part way through, I came upon the problem of power for supplying the LED strip. For white (each red, green, and blue pixel on high), each pixel uses 60ma, 20ma x 3. For a 60 pixel strip, it would use 3600ma, or 3.6a. I'm using a 2.4a USB charging port and it seems to work fine, but I'm not sure if that would be a bad thing or what the downfall would be so if you know, just say so in the questions. Many places online or not supply 5v power supplies for LED strips with a lot higher output.

The setup is fairly simple and only needs a few things to get going.

Schematic can be found here and below.

This is a description of the code settings for the IR receiver Arduino.

1 is the IR receiver pin. 2 is the IR control amount. You can either use one or two. 3 is for finding the IR codes of your control(s). Set this to true for finding the codes. When you press a button on the remote, a code will be printed to Serial with 9600baud. Keep track of which button you press for which code is printed and replace the codes in the loop. But you can't just copy and paste the IR codes into the code. First, paste the IR code into this hex to decimal converter and then paste the returned decimal into your code in the loop. If that was a little too convoluted, here's steps.

This is a description of the code settings for the LED strip Arduino.

1 is the LED strip data pin. 2 is the number of LEDs in the strip. 3 is the brightness level for all the LEDs. Settings and uploading is a lot less complicated. I also added a lightning setting and a gliding rainbow setting just for fun. Just change the settings to suit, disconnect the RX and TX lines from Arduino to Arduino, and upload to your Arduino.

IR Control and the Purpose of it's Buttons

That's all for this project. You can change anything to how you like. I will be doing more code revisions soon, so keep an eye out. If you have any questions or pointers, please feel free to comment.

Check out my other tutorials! 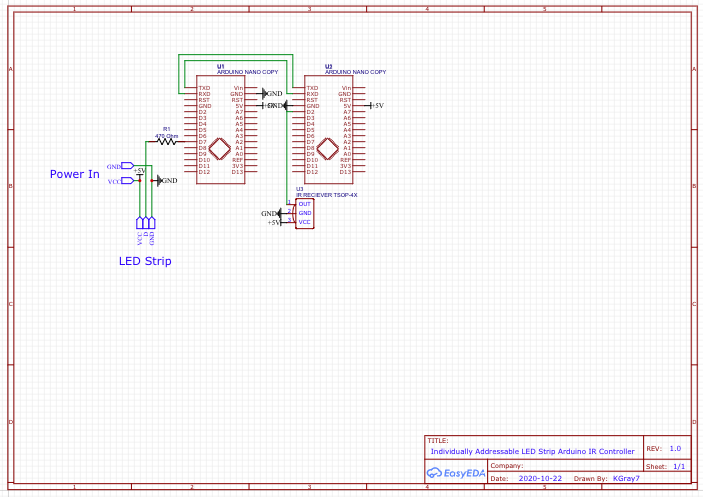 1 project • 3 followers
I love making things out of electronic components, coding in python and C++, designing PCBs and lots more.
ContactContact
Thanks to Mike.