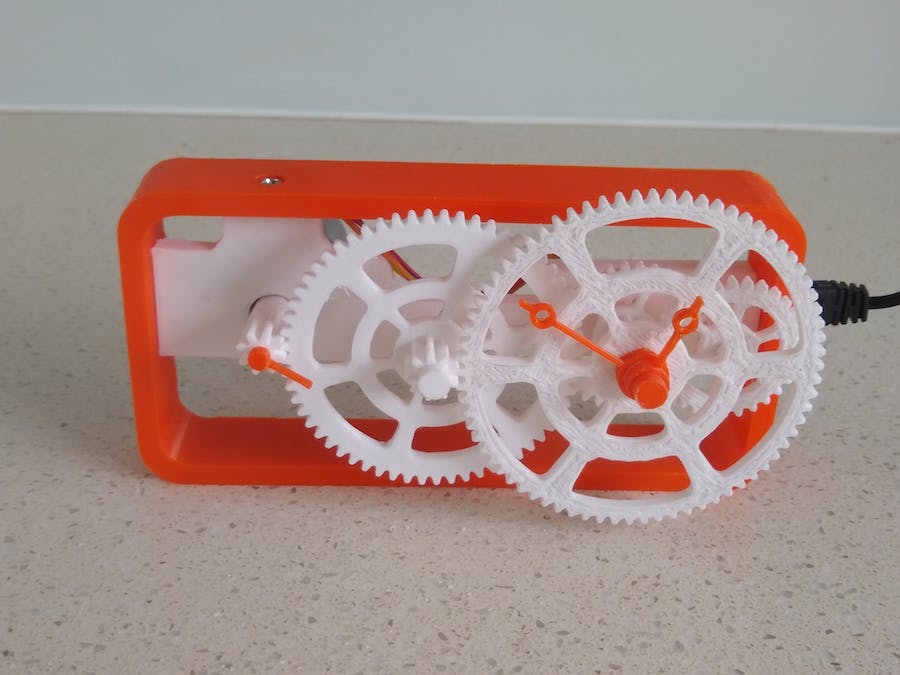 This build replaces the electronics used in the Simple Super Gear Clock by Tokyo_Bird. The Arduino Nano module and ULN2003A stepper motor driver module has been replaced with a ATtiny1614 microprocessor and 4 MOSFETs. All components are surface mount and fit on a board with the same form factor as the Arduino Nano module.

The STL files provided are a direct copy of Tokyo_Bird's STL files that you can find on Thingiverse. I have included them here for convivence. Beware of printing "Simple_Super_Gear_Clock_STL5.stl". It needs supports. I orientated it on the build plate with the shortest gap to the gear. In hindsight, I should of flipped it over as the finish after removing the supports is visible because that is the side that is at the front of the clock. Every other STL file was straight forward. Gears that sit on the build plate should be printed on a raft otherwise the first few layers may be bigger than normal due to the heated build plate.

The Eagle Files have been included should you wish to get the board commercially made or you can make it yourself. I used the Toner method to make mine.

I find it easier to use solder paste rather than use solder from a reel when soldering SMD components.

If your board is single sided, see my Roman Numeral Clock build for the method I use to add pin headers to the copper side of single sided boards. In hindsight, I should of used a right-angle pin header as the standard vertical header sticks out the back too far for my liking when the plug is connected.

Processor Board with 4 MOSFETs to drive the stepper motor

The ATtiny1614 is part of the new breed of ATtiny microprocessors. Unlike the earlier series such as the ATtiny85, the new breed use the RESET pin to program the CPU. To program it you need a UPDI programmer. I made one using a Arduino Nano. You can find complete build instructions at Create Your Own UPDI Programmer. It also contains the instructions for adding the megaTinyCore boards to your IDE.

I cut the wires from the stepper motor and added a 5 pin female pin header. The PCB should be a tight fit into the holder that originally took the Arduino Nano board.

PCB fits in the holder that was originally designed for the Arduino Nano Board.

As a clock, it works but it doesn't keep very good time. As a project, it was a pleasant and rewarding build. Thanks Tokyo_Bird 👍👍👍

8 projects • 117 followers
ContactContact
Thanks to Tokyo_Bird.