Touchless door handle mechanism that can be used in every door just replacing the standard handle. Very useful for people with disabilities.

Touchless door handle mechanism that can be used in every door just replacing the standard handle. Very useful for people with disabilities.

Coronavirus spreads through surfaces that are frequently touched like door handles - we need a solution especially for hospitals and public buildings, an automatic door opener can help to decrease the risk to be infected and is also useful for people with special needs and disabilities.

There will be two versions of the door handle, an automatic and manual one

First Test with the kinematic usinga 12v motor just to improve the movement.

Testing the movement with one 12v motor
First application with the stepper 28BYJ-48 using max. possible torque and Arduino UNO

The stepper 28BYJ-48 seems to be too weak for this application, I am considering to use two steppers or maybe one with more torque. First I will improve the mechanism to lower the required torque and if this still not works I will change the concept to a double stepper solution driving the handle trough the opposite side of the door too.

After some tests I have changed the ratio of the bevel gears to 3:1 and used spiral teeth but the mechanism requires too much torque for this little motor. So I have included a new stepper on the opposite side and this option works quite good!

An important target is achieved because using the two 28BYJ-48 steppers, this automatic door handle can be very affordable.

Prototype with the two 28BYJ-48 Steppers and Arduino UNO

The movement of the steppers are the same just in opposite direction, it means that I can use the same pins on Arduino for the both motors. This is very important because we can save 4 pins on the board for further applications.

I am replacing the PIR sensors with ultrasonic ones because then is possible to detect not only the objects but their related distance too. If we have the distance we can avoid false openings just setting the right distance to start the movement of the handles.

Step 5: So far so good but the door is still closed!

This system works properly but this is only a mechanism which activates the handle, but how to open the door automatically?

This could be solved with the Cyber Door Mover concept ;-)

The Cyber door mover open and close the door automatically and supplies electricity for the whole system. It has a wireless charger that can be placed next to the wall.

I have planned to use the well known 18650 batteries that can be recycled from old notebooks.

First prototype door mover, green part to be sticked on the door

The first prototype will run with a 9V power supply. With the screw on the left it is possible to adjust the grip of the wheel to prevent it from slipping.

My first test shows that the motor is too weak and too fast for this application, now I know that the motor is doing around 5 revolutions to open the door completely, as the nominal speed of this affordable motor is dated to 240rpm, and I want to open the door in around 3 seconds, I can try to add some gears with a ratio of around 2.5:1 to increase the torque and reduce the speed to approximately 100rpm, hoping to have enough torque.

The fixing concept on the door works really good because I can adjust the hight of the mover with the included guides and fixed the position with just two screws. This will be helpful to adjust the grip of the wheel, considering the different types of floors including slippery tiles.

That’s all about my first prototype!

In order to add a gear reduction some other parts are needed like the bracket for the motor and a new wheel axis. The motor pivots around its fixing point and with one screw it is possible to adjust the grip of the wheel.

Now it's time to print!

I have set the gears to around 1:4 ratio and now the system is working.

I have still some problems because the wheel slips slightly but I’m very confident using the right rubber tyre (the one that I’m using is made of hard plastic) the mover will work properly.

Now I can go back to the door handle adding the ultrasonic sensors and a better cable routing.

Finally using an Arduino MKR instead of Arduino Nano we can introduce smart functions like remote control for hospitals or nursing homes.

Or just to name an example: by using the adequate sensor we can detect body temperatures locking the door for people with fever.

Maybe it looks too much over-engineered but this can be an affordable solution for special cases... 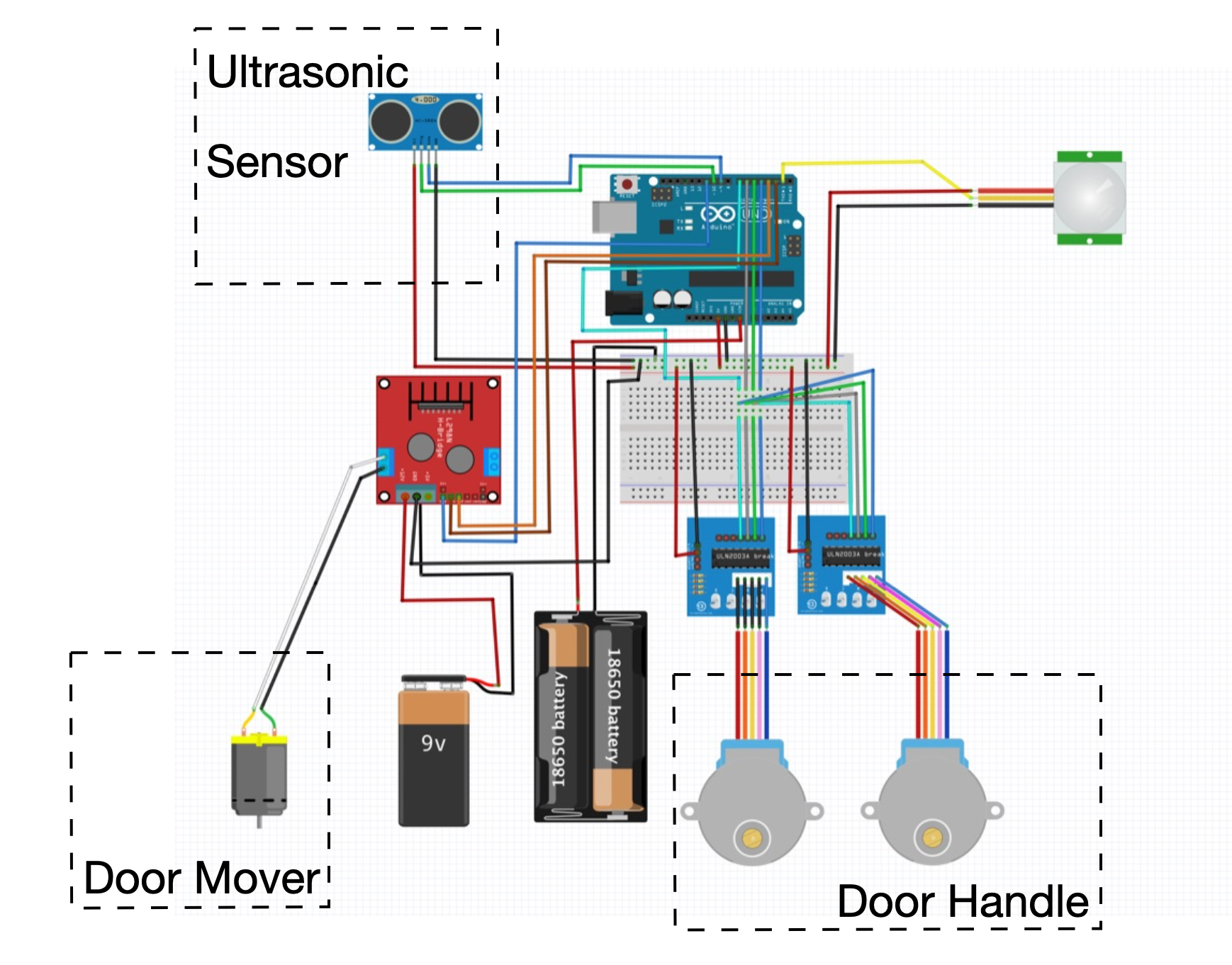 2 projects • 2 followers
I am an engineer who likes design, art and 3d printing, I am the founder of 3dthinks.
ContactContact