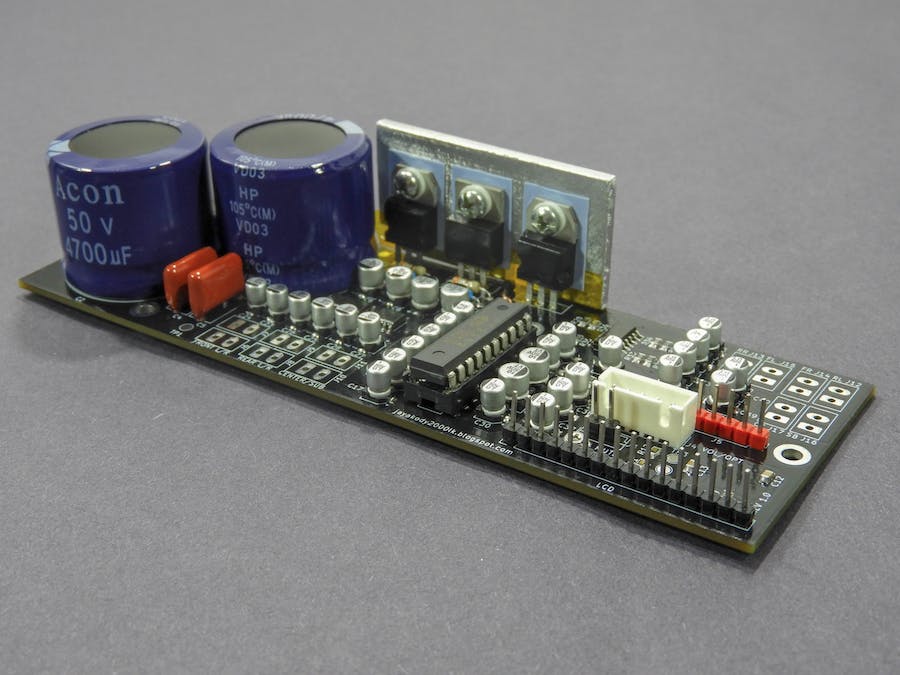 This project introduces a digitally controlled 5.1 channel audio preamplifier system. This amplifier is specifically designed to increase the gain of the multi-channel PC sound cards.

The main reason for building this amplifier is the limited gain received from the ASUSXonar AE sound card with the Creative Inspire T6300, 5.1 surround speaker system. Before switching to this soundcard, we had a Creative Sound Blaster Z card which provided good audio output with the above-mention speaker system. The key motivation of building this amplifier is to solve these gaining problems.

All the menu navigations and volume controlling can perform using a 5-pin, EC11 series rotary encoder. An additional push switch provides to mute and unmute the audio outputs.

The firmware of the PIC16F886 has been developed using Microchip's MPLAB XC8 toolchain. The provided firmware supports two volume control modes. In default mode, the user can control simultaneously control volume levels of all 6-channels. In the second mode, the user can control the volume of the individual channel. These volume control modes can select from the menu system.

The firmware can directly upload to the MCU through the ICSP terminal provided on the PCB.

The PCB of the preamplifier is designed as a double-sided board. Many of the components used in this PCB are in the form of surface-mounted packages.

We use a dual-line package for the PT2258 due to the difficulty of obtaining the SMD package.

Bottom side of the assembled 5.1 preamplifier PCB.

The recommended transformer for this circuit is 6V×2 (1A) step-down transformer. The given power supply circuit consists of three voltage regulators, including LM317, LM337, and L7805. Both the LM317 and LM337 regulators are configured to provide 4.5V dual-rail output.

The project was sponsored by PCBWay. The accurately configured PCB of this preamplifier can directly order from PCBWay through their website. The dimension of the PCB is 151.45 × 50.76mm. The video related to this article clearly shows the steps of assembling, flashing, and mounting this preamplifier.

As mentioned at the beginning of this article, we successfully tested this preamplifier with an ASUS Xonar AE sound card. This preamplifier provides significant and clean output with the above-mention sound card and speaker system. We construct our prototype build using a commonly available 230mm × 150mm × 84mm ABS project box.