A robot pal you can make easily with Arduino

A robot pal you can make easily with Arduino 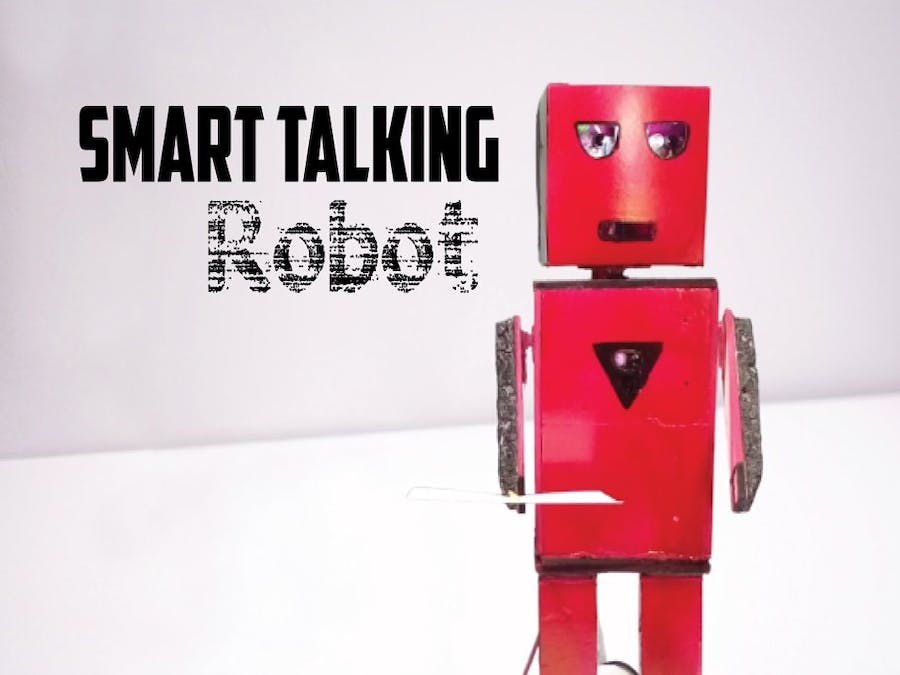 Everybody loves Talking Robots. It's like having a little pal to mess around with. If the robot is humanoid then it's more fun than ever. Among all other robots, humanoid robots suddenly become a 'he/she' instead of 'it'. Having a humanoid talking robot feels like awesome, but talking robots are seemingly complicated to make. Today I will talk about an approach that I followed to make one easily. Let's begin.

For making the body we need some

1. PVC sheets, preferably white color so that you can paint on them later.

3. Glue gun to glue things together. That's it. Now proceed.

How the robot works?

Let's talk about what we are going to do before rushing to it. Yes, we are making a robot but let us learn something first so that we can teach others too. Okay, to make a robot talk we can go through two methods (a) Speech Synthesis (b) Prerecorded audio. Among them option a doesn't perform understandably well with Arduino. So we are going for method b. So, we make some Audio file (.wav) and save them into a SD card. The robot will have some joints to move with the help of servo motors. And some sensors to interact with the outside world. If the sensors detect something it/she will play the audio files. Like if I point at eyes she reacts and moves her head.

To make the audio files I used and Android application - Text to Speech (STT). The app lets you write text and save as wav file. You can change language, voice speed, pitch etc.

After doing so copy the audio files into a Micro sd card. Do not save them into a folder, just paste them into sd card.Note: Arduino can write on any sd card (I tested on 64GB) but Arduino can only read from 2GB or less memory containing sd card. So, do manage a sd card that has memory capacity not more than 2GB.

Build The Circuit or PCB

The circuit diagram is pretty straight forward. Connect all the servo motors to Arduino digital pins.TF module takes 6 pins and 4 digital pins. Digital Pin 9 is for audio output, connect the speaker in that pin. The sensors have a voltage regulator for constant 5V power. The whole system is powered using 2x 3.7V lithium batteries. So the board and servo motors get 7.4 volts.

The circuit may seem complex at some point. That's why I made a pcb using easyEDA and printed from PCBWay.com. I am using that PCB for the next version of this robot. The PCB quality of them is very good and that solved my issue too. Click here to download the circuit diagram or pcb gerber files.

This is the most cool part. As of my design you can see, you can shape it any ways you wish to. I used cardboard box to make the head, pvc sheets to make the entire body. Then painted it red. The circuitry and motor places can be seen in the pictures. I put 2 sensors on head and one sensor on chest. That's pretty much it. I used a ribbon cable on the back to connect head sensors and led with main board.Go ahead and shape it any way you want.

The code is simple enough to understand. The only problem was when I had to use the tmrpcm library to play audio using arduino the servo motors won't spin. It's because the servo and tmrpcm library both works on timer1 of Arduino. To overcome the problem I used servoTimer2 library. Download the libraries. Place them into your arduino library folder and include. That's it. Download the code from here or copy from below. I recommend downloading.

Upload the code and test it.

That's it. Power the robot using 7.4V DC source and have fun. The audio can be hard to hear, if so then use any audio amplifier to amplify the sound. Now you have a talking humanoid robot pal!