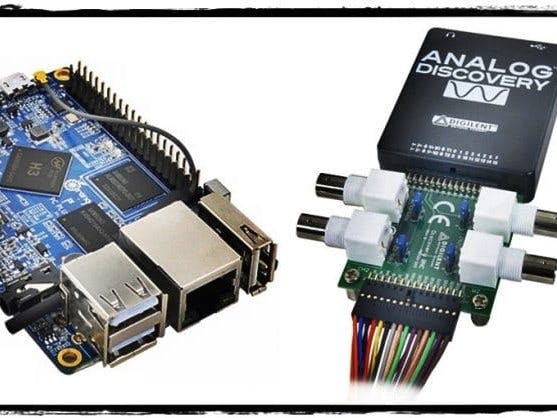 Many users of the Analog Discovery (Digilent) interface may wish to make your system more portable or less dependent on your PC, leaving you free for other tasks.

Well, I had this desire and started researching which SBC would be best for this task.

The famous Raspberry Pi was the initial idea, but reading Digilent forum I discovered about some troubles to do this. Was when I remember of Orange Pi series.

I bought a Orange Pi PC Plus because of the onboard eMMC and was an excelent choice. Cheap and powerful.

Through this post from Pedro Bertoleti (and also from his personal help) I was able to make the interface work perfectly on Orange Pi PC Plus, and probably work on other interfaces of the same series.

The following step-by-step depends on the system already being previously running.

You will need to download the Waveforms 2015 software from digilent website. Note that there are 32-bit/64-bit linux versions and also ARM based specific build distros. Download the latest ARM deb version.

As indicated in the site, the Linux distributions depend on the installation of Adept 2, also from Digilent. In this case also download the ARM version identified as "Raspberry Pi".

With both packages downloaded we will perform your installation. For installation use the generic command "sudo dpkg -i PACKAGE_NAME", similar to the following, just remember to replace the x with the downloaded version (use the TAB key to autocomplete, it helps a lot).

Use the following command to install possible dependencies from previous installations.

At this point everything should be okay, right? Well, that's what I thought. As I am a beginner in linux I was frustrated to click on the Waveforms icon and notice that it did not start. Following the tip of Pedro Bertoleti I tried to start the software through the terminal and with that I discovered that a library was missing, as can be seen in the following figure.

Use the following code to install Libpulse0:

After installing Libpulse0 everything should be ok. The interface is correctly identified and its operation is identical to a traditional PC.

With this article I hope to help other users who own the same devices or who have similar ideas, showing that these small notables (SBC's) may surprise us a lot with respect to its usability.

This article was originally posted on "Embarcados", a brazilian portal about embedded systems.