Transferring information in a industrial application can be challenging. In this project lets look at how we can do this with a FPGA & RS485

Industrial Communications with the Minized and RS485

Industrial Communications with the Minized and RS485

Transferring information in a industrial application can be challenging. In this project lets look at how we can do this with a FPGA & RS485 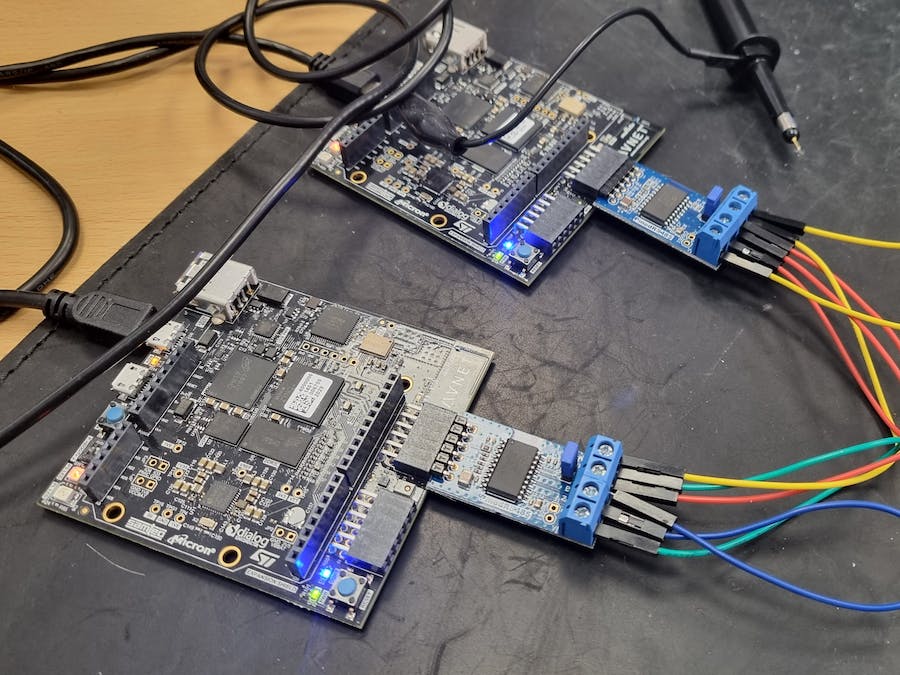 Many FPGAs are deployed in industrial settings, being used to control processes, drives, actuators and sensors.

The protocols used to interface with these sensors, actuators and drives are quite diverse although Time sensitive Networking is changing this. While there are many different protocols for example Modbus, Profibus, and EtherCat. Many of these protocols are based on common physical layers such as EIA/RS485, EIA/RS422 and Ethernet.

There are many application level protocols which can be implemented using these physical layers. In this project we are going to look at connecting together two MiniZeds using RS485 Pmods and a bespoke application layer protocol.

The custom communication protocol implemented is going to enable the master MiniZed to be able to read or write a 32 bit word from a 16 bit address space within the slave MiniZed. For this project we will be reading and writing from a BRAM in the slave. However, this BRAM could be being populated by the sensors gathering data on the slave MiniZed.

The format of the write is

The format of an read is

The read response from the MiniZed slave will be

The SOH, STX, ENQ, ACK and NACK are defined in the ASCII table

Of course this protocol could be implemented using a UART in a processor like the ZYNQ however, to make the protocol scalable. I have created custom RTL modules for the UART, Protocol Master and Protocol Slave.

As the RS485 is directional on the same twisted pair the protocol must only enable the RS485 transmitter when it ready to transmit to reduce the potential for contention on the bus when multiple transmitters attempt to transmit at the same time.

The MiniZed Master design will use the PS core to send and receive data over the RS485 Interface. This will enable the link to be tested as data should be able to be written across the link and then read back in different order from the Block RAM in the MiniZed slave.

The design uses AXI GPIO modules connected to the Protocol Master module to drive the Interface requirements of the protocol master block. This includes the Address, Data and read or write action. The result provides the address read from and the read data.

To be able to debug the application I included several ILA's as well, help understand the system behavior.

The software application running on the Minized Master is

The MiniZed Slave uses the PS module to provide the clocks for the logic design. The Protocol Slave is connected a BRAM which stores the data provided over the communication link.

There is no software needed in this implementation of the MiniZed Slave just the Protocol Slave, UART and BRAM. As with the MiniZed Master the PS provides the clocks for the modules.

Both the MiniZed Master and Slave use Pmod 1 on the MiniZed to connect to the RS485 Pmod. As such the XDC files for both are the same.

The RS484 bus is pretty straight forward but we do need to wire up the Pmods properly as shown in the Digilent PmodRS485 reference guide.

The two ends of the RS485 terminal need to be terminated with a resistor, on the PmodRS485 this can be fitted or not using a jumper. For this application both resistors need to be fitted.

When wiring this up be careful to connect the loop back for the receiver on the Pmod.

Using the software application running on the MiniZed master we can read and write the BRAM memory in the MiniZed slave. However, to understand how it works we learn best from looking at the waveforms on the bus

The corresponding bus side looks as below - note the 0x06 at the end is the acknowledge.

The RX pin on the logic RX signal at the master shows the write and the write acknowledge. The designs on both the MiniZed Master and Slave have the RX permanently enabled

Reading from the MiniZed Slave looks as below, with the data representing a incrementing count written in by the MiniZed Master.

In the waveform below the read request can be observed on the bus side, prior to the read response.

The timing of the TX Enable with respect to the TX Data is shown below note how we disable the TX path when a reply is expected.

FPGA make great solutions for many industrial applications, this project has demonstrated how easy it is connect different boards and transfer data using commonly used industrial interfaces. In this application the data rate was 1Mb/s put line rates up to 16Mb/s or faster can be achieved!