Communicating between FPGA up to 40 metres apart using IR modulation.

Communicating between FPGA up to 40 metres apart using IR modulation. 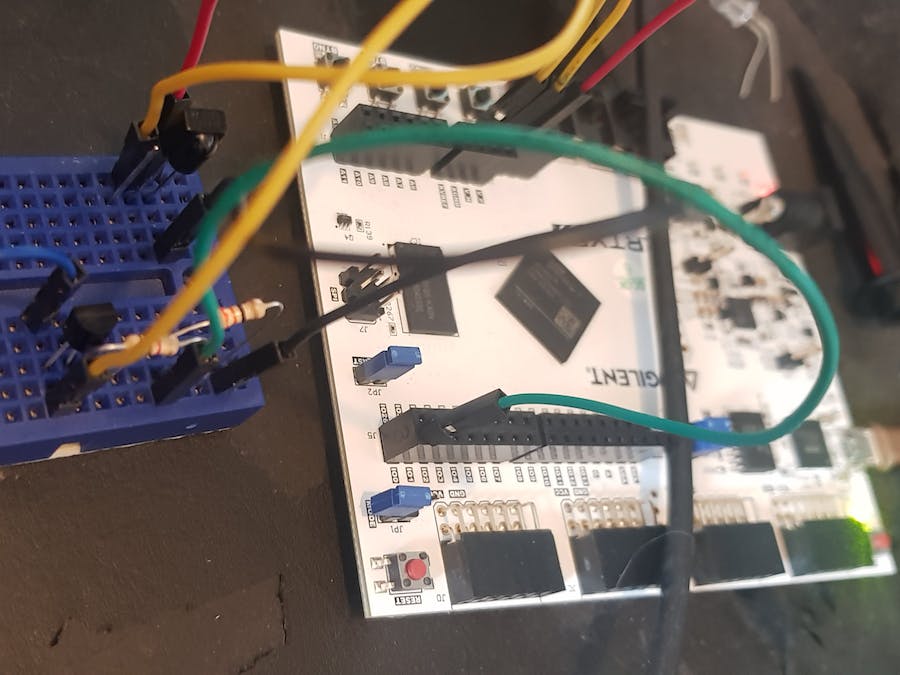 Processing at the edge is a rapidly increasing application for embedded systems, often these edge nodes are connected using a RF link e.g. Zigbee, WiFi etc. However, there are applications where RF is not suitable for example when you want electrical noise kept to a minimum or when adding RF communication adds significantly to the cost of the system.

In these cases simple communications can be implemented between a host and one or more slaves using Infra Red Communication.

Depending upon the architecture of solution we choose we can achieve very fast data rates to transfer data between FPGAs.

Of course such an approach also enables the system to be expanded to communicate with other non FPGA embedded systems which have a UART Interface.

The approach I am going to take is to use a IR LED emitting in the 940-950 nm wavelength range. The signal output over this IR LED will be modulated to enable better transmission performance, e.g. less interference from other IR sources.

This modulated IR signal will be received by a IR receiver which decodes the modulated signal and outputs a simple Logic level signal.

The IR decoder selected is a TSOP58438 which operates at 38KHz, this means we need to be able to modulate the IR signal at 38KHz.

Using this approach means we can work up to a range of 40 Metres.

This is a modulation scheme is called on off keying.

To implement this scheme I am created a FPGA module which would create the 38KHz carrier wave.

This carrier wave is then output or not dependent upon the input logic signal.

To make the modulator useful with other IR receivers which might work with different frequency carrier waves. The module has been designed to be flexible without the need to change the source code thanks to the generics. This is also the same for the clock frequency of the module.

The main application deployed in the FPGA will be the same for both the RX and the TX. The only thing which changes is the application software, which will be running on the MicroBlaze on the FPGA.

Running a MicroBlaze means we can add sensor and motor interfaces with ease to the AXI interconnect.

To get started with the MicroBlaze design we need to create a new project in Vivado. For this project I am going to use Vivado 2020.1

While I will cover the basics here for more detailed information on project creation in Vivado 2020.1 see my blogs here P1 & P2

In the new Vivado project, create a new block diagram, to which we will be adding the DDR3 SRAM controller.

We can add in the DDR3 controller by dragging the DDR3 SRAM element from the Board tab onto the block diagram.

Once this has been added, we can start adding in the MicroBlaze element of the design as well. Click on the + symbol and in the resulting dialog enter MicroBlaze.

This will open the MicroBlaze configuration dialog, leave all the options the same except on page four enable the peripheral AXI instruction and data interfaces.

Once the MicroBlaze is instantiated on the diagram we can run the block automation option to implement the resulting elements of the system.

In the block automation you can if you desire change the sizes of the local memory. Otherwise leave all the settings as desired and click on OK

This will run through and implement the necessary supporting functions for the MicroBlaze System.

All that remains then is to run the connection automation and the peripheral components will be added in.

Add in a AXI Uart lite, this will be used to communicate with the external world.

Once this has been added in we can re run the connection automation to connect in the Uart to the AXI network.

This gives us the ability to communicate over the USB UART.

We also need to add I a clocking wizard to provide the reference clocks to the DDR3 Controller.

Connect these to the DDR Controller deleting the currently added ports.

Finally we also need to add in the IR Modulator and a second AXi Uart Lite. The input and output from the IR modulator are routed to the Shield header pins 0 and 1

With these added in, we are then able to create a HDL wrapper and implement the design and generate a bitstream.

Once the bitstream has completed its build we can export the hardware definition to Vitis.

As we have a bitstream created, we want to include it with the exported archive.

Leave the name as default, I also export the hardware to the root directory of the Vivado project.

Once the export is completed we need to open Vitis and create a hardware platform. We can use the same platform for both TX and RX applications.

Select create hardware form XSA specification, this is the one we just exported from Vivado

Point the dialog box to the XSA export and select the standalone and MicroBlaze for the OS and Processor.

This will open Vitis with a view of the newly created platform project, click on the hammer in the menu bar to build the platform files. This includes the BSP and boot elements.

We can then create a new application project to test the IR modular, TX and RX interfaces.

When a template is offered select the Hello World operation

The modify the software application as shown below, this design outputs and receives over the same UART the hardware design being looping back.

The software outputs a count over the IR Modulator the receives the decoded signal back from the IR Receiver. The received count is then output to the terminal.

This means we can test the IR Modulator, IR TX and RX using only one board to begin.

To download the application to the Arty S7 we need to create a debug configuration.

We will be creating a System Project Debug

This will create a new configuration dialog which can be used to download the FPGA configuration and then the MicroBlaze application.

The main element of the front end design is the IR transmitter, we need to create a simple transistor drive. This is because the IO pins of the FPGA cannot source the current required by the IR Diode.

The transistor switch is simple to design, we want 100mA flowing through the LED. We will connect the LED between the transistor collector and ground. Switching on or off the transistor will allow voltage to flow across the LED or not.

The collector voltage will be supplied from 3v3 supply on the Arty S7 board, while the emitter will be driven from the FPGA pin modulator output.

Selecting the right Collector is simple, assuming the switch saturates.

The Base resistor can be determine by Ib = Ic/HFe where HFE is 50 for this application.

The base voltage is also driven from 3v3 as such the required resistor is 1650 Ohms.

The closets resistor I had available was 1000 Ohms this means we can supply 165 mA to the IR LED, still acceptable.

Simulating the switch should show the waveform at the collector switching as the transistor saturates.

The first thing to do is observe the modulated output, with no signal is being transmitted.

What we want to check here is the carrier wave is at the correct frequency, we can verify this using a Oscilloscope.

Once we are satisfied the carrier frequency is correct we can send over data. Here is where we need to be careful, the transmitter needs at least 10 38KHz pulses for a minimum burst. As such if we want to send data over the link we need to take this into account, that is each bit period must be atleast 26 microseconds duration.

This means the maximum data rate we can use is 3800 Baud more than sufficient for simple communications.

Observing this with an oscilloscope will shows the decoded UART input (blue) and the modulated output signal bottom which the IR Transmitter relieves (red).

The count as decoded on the oscilloscope should align with the number displayed on the output screen.

In this manner we can send and receive data between the two boards while they have no electrical connection.

Creating the RX and TX application

With the IR front end and modulator proved to be working it is time to create two applications one for the IR TX and another for the IR RX.

We need to create a new application system for the RX application, which targets the same hardware platform.

We can do this in Vivado, using the associate ELF file, in turn merge the TX and RX ELF with the bitstream.

Once we have two bit streams we can open the hardware manager and program the QSPI flash with the bit files.

Once both boards are flashed we can test the application

In this example I have connected the IR TX board to be powered from a USB battery bank. while the RX is connected to the PC, to be able to display the output.

We can communicate in this manner up to 40 Metres not bad for a simple approach.