Not all imaging systems need to be expensive. Solutions can be created using cost optimized FPGA and CMOS image sensors directly.

Not all imaging systems need to be expensive. Solutions can be created using cost optimized FPGA and CMOS image sensors directly. 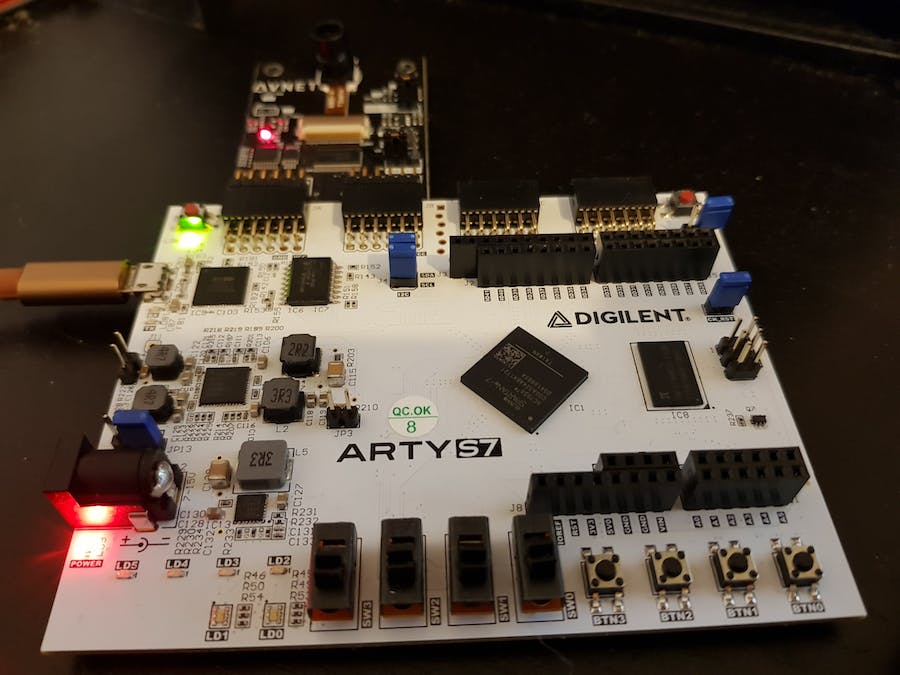 Developing an embedded vision system does not require the use of an expensive FPGA or SoC, large frame buffer memories and a external camera.

We can develop a very powerful image processing system using a cost optimized FPGA / SoC interfacing directly with a CMOS sensor. This allows a solution to be created which is not only achieves cost targets but also one which is compact and power efficient.

Interfacing directly with a sensor is different to interfacing with a camera as we have done previously. When we interface with a camera we receive a video signal over HDMI, CameraLink etc which is fairly straight forward.

When we interface with the image sensor we receive the images typically in a different format e.g. MIPI or Parallel and before we can receive the video we need to first configure the imager to operate as we desire.

Typically imagers require configuration over I2C or SPI, and the number of commands sent over interface can be significant.

As the Arty S7 does not provide a HDMI or other video output directly on board, this example will use a Avnet 10 inch touch screen. However, this is optional another option for outputting the final image is the Digilent Pmod VGA. This Pmod could also be used to implement a very low cost solution.

The interfacing with the TDNext Pmod is pretty simple and can be split into two elements the Video and Configuration.

The design will also use the softcore processor to control the Video Timing and other associated configuration tasks of the image processing path.

The TDNext is a color imager, this means that the imager has a Bayer pattern applied which filters the wavelength for each pixel. This means each pixel only accumulates photons in either the Red, Green or Blue wavelengths, during the integration period.

At completion of the integration time each pixel is read out as either a 8 bit or 10 bit pixel. This pixel value is referred to as a RAW8 or RAW10 pixel. To recreate a color image, the values of surrounding pixels which contain pixels of different wavelengths are combined using a de-Bayering algorithm.

The first thing we need to do is create the Vivado platform, this will receive the images from the TDNext Pmod.

To create the block diagram we will be using mostly IP cores from the Vivado library however we will use a camera interface block and a output block from the Avnet library which is available here.

Once downloaded these files should be installed in your Vivado directory under the following path:

This will allow you to then select the Arty S7 board as your target board for the creation of a new Vivado project.

With the board installed, the next step is to create a new project, block diagram and create the MicroBlaze system.

With the MicroBlaze system up and running, the next step is to add in the video processing pipeline. The processing chain will use the following IP blocks

If we are using the Pmod VGA we do not need to use the ZED ALI3 Controller IP block.

Before we can add in the Zed ALI3 and CAM Interface we need to reconfigure the IP core to be able be included in Spartan 7 designs. We do this from the IP catalog view, selecting the desired IP cores and clicking edit IP in packager.

This will open a new project and enable you to select the comparability tab and add in support for the Spartan 7 device. Repackage the design and update the IP lib in the Vivado project.

Updating the IP cores for use with the Spartan 7

Once the IP have been upgraded to support the Spartan 7 we are then in a position to complete the design. The complete bock diagram should look as below. It is available on my GitHub Account for a closer look.

AXIS to Video connection to VTC in slave mode

This approach allows the AXIS to Video IP module to control the timing of syncs by enabling and disabling the VTC, so they match the timing of the Syncs in the processing pipeline.

Key customization for the IP blocks are :-

Video In to AXI 4 Stream

configuration of the AXI4 to video stream

Configuration of the Sensor Demosaic

configuration of the I2C component

In the design I have also added in several Integrated Logic Analyzer (ILA) to enable internal monitoring of the status of the system and debugging.

The total utilization of the Arty S7-50 when the project is completed is shown below.

We can use the additional resources to implement image processing algorithms using HLS is necessary. If we want to save resources, we can use the minimum footprint for the MicroBlaze and remove the ILAs.

Writing the Software in SDK

Once the Vivado hardware has been generated the next step is to write application software which will configure the imager and the IP cores on the video processing core.

As such the software will perform the following

To initialize the imager, I have converted the Zynq based libraries as provided with the TDM114 example design into a format which can be used with the AXI IIC.

Once the camera has been initialized we will be able to see video on the ILA which is connected to the video stream to AXI Stream component.

Once the camera has been detected, the application will download several I2C camera configuration settings.

Progress will be reported using the AXI UART

Once the camera is initialized we can use the ILA to verify, video is being generated by the imager and it is at the resolution we configured.

We do this by using a ILA and examining the video directly as it is received within the FPGA.

1280 Pixels being received from the Imager

The image above shows a line width of 1280 pixel, which is exactly what we are expecting.

Received pixels are converted from parallel format into an AXI Stream.

AXI Stream is a unidirectional bus used to transfer data from a master to a slave, as a stream of data it does not contain an address channel. To control flow and communicate video timing information over the AXI Stream the following signals are used

The second ILA can be used to ensure the AXI Stream is being correctly generated.

As we have no VDMA it is important the video output on the AXIS stream is a contiguus block and that TValid does not assert and deassert during the active pixel period.

We can ensure Tvalid is contiguous by using the pixel clock for the image processing chain.

The Library API used in this project are below, with the exception of camera_initial.h which contains IIC configuration data. All other header files are provided by Xilinx based upon the hardware configuration.

The main loop of the application can be seen below

Running the Entire software application resulted in me capturing the image below of the my conference badge collection.

Initial Image captured from the sensor

I need to adjust some of the settings to provide to increase the integration time however, the basic image processing pipeline is working as we would expect.

It is easy to create a vision processing system which works directly with the imager in place of a camera. This often allows for a more cost efficient and potentially a more responsive solution as processing chain is significantly reduced.