Learn about photoresistors and the process of characterizing their response to light intensity.

Learn about photoresistors and the process of characterizing their response to light intensity. 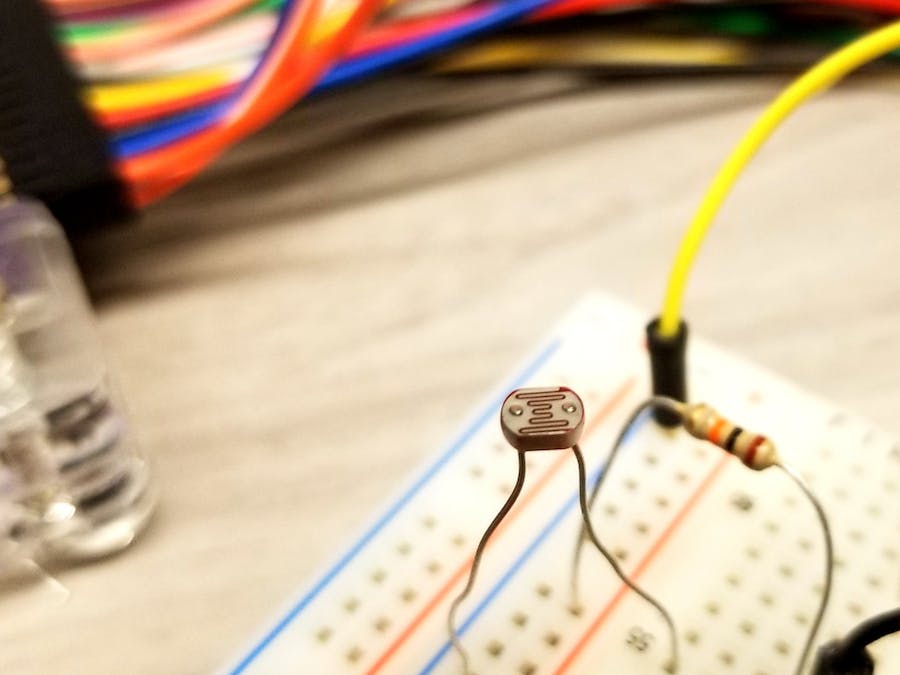 LDRs do not respond rapidly to changing light levels. Unlike photodiodes and phototransistors, which can detect a change in light in a matter of nanoseconds or microseconds, LDRs require a few milliseconds to detect a change. Thus, LDRs are typically used in situations where the overall amount of ambient light, and not response time, is important, such as camera light sensors, street lights, and even heart rate monitors. These applications work on a millisecond or greater order of magnitude, and thus do not require the rapid response seen in other light-sensing devices.

A photoresistor/LDR in a typical voltage divider configuration

It is necessary to characterize the LDR's response to different illumination levels before it can be used for measurements. This requires that some measure of brightness is made, whether it is in subjective terms such as "dark", "bright", and "brightest", or in absolute values measured by some other device. Conveniently, most people have access to a light-measurement device in the form of their cell phones because ambient light sensors (ALS) are key for automatic screen brightness management as well as some other functions. In order to perform the characterization described in this article, it is necessary to download an app that can read out the brightness of a light in lux. Both Google Play and the Apple Store contain various apps that allow users to access the data output from the sensors the phone manufacturers chose to include. Two such apps are Sensors Multitool (Android) and Lirum Device Info Lite (iPhone).

The following steps will describe the process of characterizing a photoresistor and generating equations describing its response to different light levels. These equations will then be applied to Arduino code.

Note that it's best to use white light sources because using a specific color may not provide the true response of the photoresistor. If an RGB LED is available, follow this guide to vary its brightness. An RGB LED is an excellent way to get a wide variety of data points for this characterization, as it has 255 brightness levels with an Arduino (although it's not necessary to use all 255 steps). A bright bike light will provide good data towards the bright end of the scale.

At this point, the data will need to be broken up into smaller subsets, each of the subsets with their own trendlines. The microcontroller that will be monitoring the LDR has no way of knowing what level of brightness a particular voltage reading signifies. It will be converting the values it collects into units of lux based on some equations that it is programmed with. If the equations do not strongly correlate to the data points gathered, then the microcontroller will perform an inaccurate conversion. The LDR's response to changing light levels is not the same across its resistance range, so several trendlines are better at describing its behavior rather than a single line.

The goal with each trendline is to make the R² values as close to 1 as possible. Depending on the particular data set used, either the exponential or the polynomial equations will generate the closest fits. The process of breaking up the data is subjective and may require a few tries to get the best result. Select the subsets based on what creates the best-fitting trendlines. For example, in the graph above, the curved portion on the left side would be a separate curve from the flat portion. The final characterization of the LDR used in this demonstration had 4 equations, each with an R² value greater than 0.994. The following steps will describe how to break up the data and generate equations for use with an Arduino (or any other programmable microcontroller).

The function readBrightness() can now be used to measure the amount of light falling on an LDR and return the value in the form of a float. It can be copied into any Arduino sketch, provided that the "[ANALOG IN PIN]" portion in the analogRead() command is replaced with the correct pin number. Also, be sure that none of the variable names used in this function are duplicated as global variables.

Below is the data that was collected for this demonstration, the graph that was generated from the data after subset trendlines were applied, and the readBrightness() function with the LDR-specific equations and thresholds applied.

1 / 2 • Data that was collected for the photoresistor characterization

The characterization can be taken one step further to make it more universal. The voltage values generated with the process given above are depend on the 220Ω resistor in the divider. By applying the voltage divider formula and solving for the upper resistor, the resistance of the LDR can be found for each lux value. The equation for calculating an unknown resistance, R1, in a voltage divider will be derived below, but trendline application and coding will be left to the reader.

Refer to the image below for a schematic of a voltage divider.

To find the voltage at the divider, Vout, first find the current, I, flowing though R2:

Substitute I and rearrange to move the resistor sum (R1+R2) out of the denominator:

Substitute 5V for Vin and 220Ω for R2 and enter this equation into Excel. Vout will be the values in the "Volts" column. R1 is the LDR's resistance. The rest of the process is the similar to the one described in this article, but instead of correlating the voltage measurement with lux, the equations this process will yield will correlate the LDR's resistance with lux.